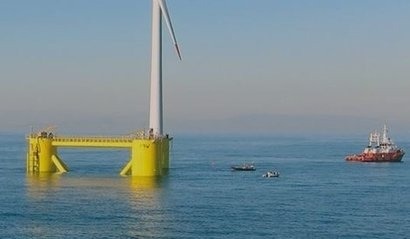 The WindFloat (WF1) is a floating foundation for offshore wind turbines constructed to a simple, economic and patented design. The features of the platform dampen wave and turbine induced motion, enabling wind turbines to be sited in previously inaccessible locations where water depth exceeds 40 metres and wind resources are greater than those closer to shore. The prototype has now met or exceeded all its design expectations and Principle Power, along with its project partners EDP, Repsol, Portugal Ventures and A. Silva Matos, have been extremely pleased with the results.

The 2 MW WF1 was installed at a distance of 5 kilometres from shore, near Aguçadoura, Portugal, in October, 2011.  Over the course of its operation, it has endured extreme Atlantic Ocean weather conditions, including waves exceeding 17 metres in height, and winds exceeding 60 knots. Its operational performance has been as impressive as its ability to withstand extreme wind and wave conditions, delivering approximately 17 gigawatt hours of energy to the local grid whilst providing high levels of availability.

The final stage of the technology demonstration will involve the decommissioning of the system. This activity will demonstrate the advantages of the WindFloat, relative to bottom-fixed offshore wind foundations, with regards to decommissioning including: reduced decommissioning risk, reduced costs and reduced environmental impacts.

“We couldn’t be more pleased with the stage of technology development we have achieved” said Joao Metelo, President and CEO of Principle Power. “We have taken the WF1 testing program step by step, proving at each milestone the efficacy and market leading nature of the WindFloat technology. We continue to incorporate all the learnings from this prototype into our current and subsequent designs and we look forward to delivering on our robust pipeline of projects in the coming years.”

Luís Manuel, Executive Director of EDP Inovação and Board Member of Principle Power, added that the experience of working with Principle Power on the project, over the past 8 years, has been incredibly rewarding for EDP, the WF1 being the most successful demonstration project in the Portuguese Offshore Renewable sector, cementing Portugal, and the project partners, as global leaders in floating wind offshore.

The technology has proven itself to be reliable and competitive and the project partners now want to bring it to the next level through a multi-unit project, the WindFloat Atlantic Project. This will be enacted with support from the Portuguese State and the EU’s NER300 scheme and will consist of a 3-unit, 25 MW array of WindFloat systems which are already being developed in Portugal. The project partners believe this will set the stage for many more floating offshore wind projects across the world.

The WF1 project has enabled the technology to evolve substantially such that there are current designs now underway for multi-unit wind farms with 5-8 MW turbines from various suppliers. Principle Power is now focused on its near-term projects in markets around the world, namely Portugal, the US, France, the UK and Japan.