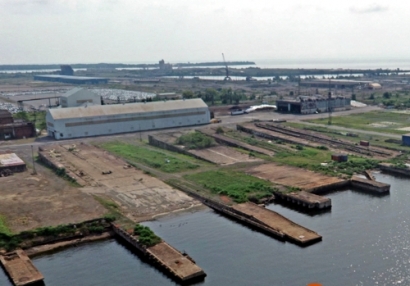 Establishing a facility for offshore wind at Tradepoint Atlantic marks a major milestone in the development of Ørsted’s Skipjack Wind Farm located 19.5 miles off Maryland’s coast, and the expansion of Maryland’s offshore wind energy workforce.

The Ørsted staging center will total 50 acres, including five acres adjacent to Tradepoint’s deep water inner berth. Ørsted will receive and loadout components at the berth and have up to 45 acres designated for laydown and assembly of components destined for the project site off Maryland’s coast.

The center advances Ørsted’s commitment to create 1,400 jobs in Maryland as part of the Skipjack Wind Farm, including 913 jobs measured in full-time equivalents during development and construction and 484 jobs during operation.

“Today’s announcement puts Tradepoint Atlantic on the global map for the offshore wind energy industry,” said Lt. Governor Boyd K. Rutherford. “Governor Hogan and I have been deeply committed to working with Tradepoint Atlantic to ensure this site is just as economically dominant in the 21st century as it was in the 20th. Today’s announcement is another big step toward that goal.”

The agreement is part of Ørsted’s commitment to a $13.2 million investment at Tradepoint Atlantic. Improvements will include strengthening ground bearing capacity at the port to allow heavy-lift cranes and specializedtransporters to move wind turbine components, some weighing as much as 2,000 tons, from ships onto the site.