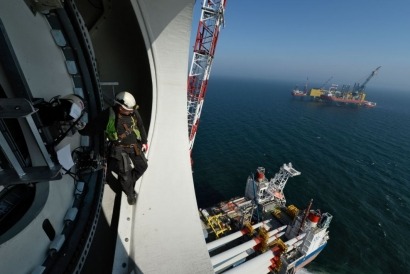 The company reached this milestone with the nineteenth Senvion 6.2M126 of 48 planned turbines that are currently being installed at the Nordsee Ost offshore wind farm. The additional 29 turbines for Nordsee Ost are already pre-assembled apart from the blades, so the entire installation will be completed in a matter of weeks.

By then, Senvion said in a written release, the company will have delivered more than 800 MW of installed capacity offshore

“We have managed to install 19 turbines for Nordsee Ost in just ten weeks," Andreas Nauen, CEO of Senvion SE, said, "This cements our position as the strong number two in the offshore market. And we are again showing pioneer spirit: Not only are we applying another assembly method with single blade assembly offshore, we are also installing our own PowerBlades at sea for the first time.”

Senvion was the first company to bring a 5 MW turbine to market; the prototype was erected in 2004. The Senvion 6.2M126 is the world’s most powerful mass-produced offshore turbine.

This year, Senvion will install the prototype of its newest offshore turbine: With the Senvion 6.2M152, the company is again setting standards in the cost-effective generation of offshore wind energy. Thanks to the larger rotor diameter of 152 metres compared to the Senvion 6.2M126’s 126 metres, the energy yield at wind speeds of 9.5 metres per second is increased by up to 20 per cent. The workshop commissioning of the prototype has already been completed successfully.