Wind turbine industry getting own reality show on US Weather Channel

Tuesday, 07 February 2012
0
Dan McCue
The US wind energy sector may be awash with uncertainty as it awaits the fate of the soon-to-expire production tax credit, but many Americans are about to get their first “up close” taste of the industry via a new reality series set to debut on the ubiquitous Weather Channel in April. 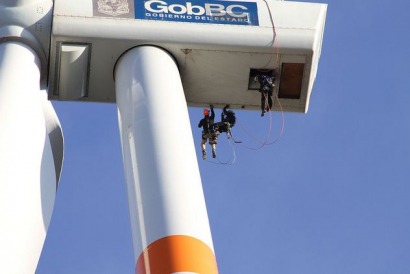 Called “Turbine Cowboys” and featuring men and women who actually do installation, maintenance and repair on turbines, the show is being advertised as a reminder of the risk and drama associated with working in what’s portrayed as a dizzying, high-risk environment.

Throughout the show, the workers will be shown dealing with the elements – this is being shown on The Weather Channel, after all – as well as huge pieces of equipment.

The channel, which is part of the NBC television network in the US, describes the cast as being “pushed to the limit both physically and emotionally as they brave extreme heights and every conceivable weather condition to work on wind turbines.”

The show was cast late last year, and early episodes will feature on-location shoots in areas as different as Baja, California and the Alaskan coast, as well as a look at the “boot camp” training attended by those on the show.

The show is part of The Weather Channel’s larger “Braving the Elements” series on American workers that so far includes high-rise ironworkers and utility emergency repair crews.

“Working in extreme weather conditions requires a certain personality, and all of these miniseries feature a fascinating group of individuals who find their work thrilling, terrifying and rewarding all at the same time,” said Bob Walker, executive vice president and general manager of networks and content, The Weather Channel. “As ‘Braving the Elements’ explores the daily conditions in which these courageous men and women work, viewers will no doubt gain a profound respect for their contributions to society and our everyday lives.”