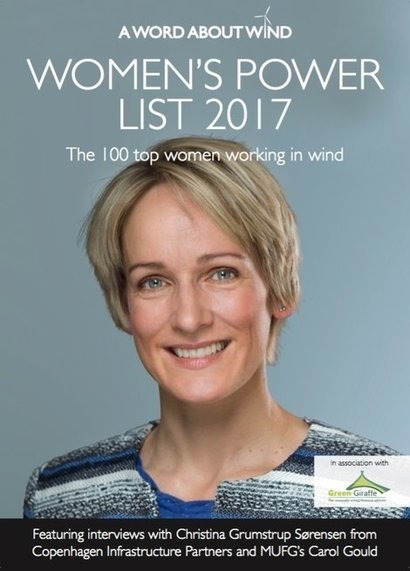 The report aims to promote and celebrate the contribution of the female deal-makers and power-brokers shaping the wind industry’s development, offering first-hand insights into nominees’ career successes. Women remain significantly under-represented at senior management and board level in many areas of technology and finance, including the wind sector.

According to the report, there are two primary reasons why this is the case. Firstly, the wind industry draws heavily on engineering and finance graduates – both of which are male-dominated subjects. And secondly, company policies within the sector, as in others, mean firms can struggle to retain women after they become parents.

The Women’s Power List aims to highlight the achievements of women within the wind industry, in the hope of attracting more women to the sector.

“Issues surrounding gender equality have wider repercussions for the wind industry as a whole” said Richard Heap, Editor at A Word About Wind. “If businesses within the wind industry are struggling to recruit from half the population, or unable to retain talented female employees, then that’s a serious problem. With the Women’s Power List we’ve aimed to highlight and discuss the underlying issues affecting women in our industry, as well as celebrate the achievements and exciting careers of some of the leading female investors, developers and engineers in the field.”

Emma Pinchbeck, RenewableUK’s Executive Director, added that the new power list highlights the important role women are now playing in the wind industry. The UK is one of the leading performers in the rankings, which is an encouraging sign that the sector is becoming more inclusive. The sector needs to ensure that women across the country see wind energy as an open and attractive industry to work in, which means promoting renewable skills and opportunities to a new generation of women entering the workforce.

Within the report, Carol Gould, Managing Director and Head of Power and Renewables at MUFG, discusses the power project finance deals in which she’s been involved, how she expects the market to develop with the move to competitive auctions, and the challenges for women in the banking sector. Christina Grumstrup Sørensen comments on issues including flexible working and parental leave, as well as how she became interested in engineering and her role as a Senior Partner at Copenhagen Infrastructure Partners.

In addition, Sophie Cherrier, Director at Green Giraffe, speaks about the large offshore deals in which she’s been involved, and how best to bring more women into the fold within the wind industry.