Making the Case for Offshore Wind in Scotland 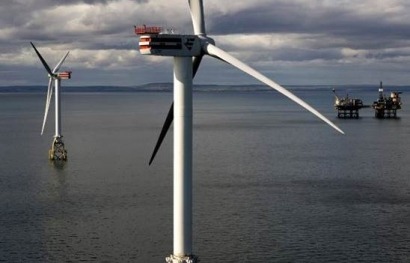 The four projects, called Neart Na Geoithe, Inch Cape, Seagreen Alpha and Seagreen Bravo, are planned to be positioned east of the Fife Ness coastline and off the Angus coastline. Ultimately, these projects will generate enough energy to power 1.4 million homes, increasing the share of clean reliable energy included in Scotland’s energy portfolio.

Given the staunch NIMBY, or “Not in My Backyard” opposition that exists in Scotland and throughout the United Kingdom, it is a great accomplishment on the part of Scottish Renewables to have successfully achieved project approval. Despite the strict conditions that Scottish Ministers implemented on the projects at that time, Scottish Renewables was able to secure the support of some environmental groups, including Friends of the Earth Scotland and WWF Scotland, due partly to these groups’ belief that climate change is a significant threat that must be addressed sooner rather than later.

However, other environmental groups do not consider the Scottish Ministers’ conditions, which sought to limit the range of potential impact to birds and other environmental considerations, to be strong enough to protect wildlife. This disconnect in terms of the perceived costs versus the benefits of the offshore projects is now causing Scottish Renewables to divert attention to the legal challenge filed by Wildlife Conservation Charity and the Royal Society for the Protection of Birds (RSPB).

The Royal Society for the Protection of Birds is known for taking a stand in support of nature and wildlife on behalf of their members and the general public, sometimes even at the expense of renewable projects.  RSPB’s goal is to make sure that the environment and wildlife are “properly safeguarded” for the future, with the pledge that they will continue to “support the development of carefully sited and designed renewables, including offshore wind.

However, individual developments must be sited to avoid significant harm."  Although RSPB supports the concept of offshore wind, members fear that the Scottish Renewables projects that have already been approved remain as a threat to Scotland’s marine environment and seabird colonies. Many who protest offshore wind projects share similar beliefs, thus causing companies to refine their plans or cancel them all together in search of a less controversial site.

Each of Scottish Renewables’s offshore wind farms took anywhere between one and two years to assess, and now with an organized opposition group headed to court, it looks like it will be a while before progress can commence.  This delay wastes valuable time and resources for Scottish Renewables and temporarily (and potentially permanently) forfeits the many jobs supported by supply chains where offshore wind flourishes.

Despite the conditions set by the Scottish Ministers to ensure that protection of the environment, opponents are able to still cause delays for the already approved project.  Elected officials represent the will of the people and yet special interest groups that oppose the project still lay a heavy hand in the ultimate success or failure of offshore wind proposals.  To save time and money, companies must engage communities and stakeholders throughout the entire permitting process to ensure that community members are informed and engaged every step of the way.

Initiate Outreach to the Community

It is critically important for the offshore wind industry to inform communities from the start of any proposal to prevent the spread of misinformation and to dispel any preconceived notions of offshore wind as a threat to wildlife. The industry can educate the communities by using a variety of outreach methods.  These outreach methods can include direct mailing and open house information sessions.  Targeted direct mail affords proposals the opportunity to highlight the project’s benefits with respect to jobs, revenue and clean energy generation.  Open house sessions also provide channels of open communication between residents and project experts where questions and concerns can be discussed. By proactively educating the community on the proposal, any questions or concerns residents may have can be addressed directly by the company itself.   The key point is - don't wait until opposition arises to build public support.

It is important that a database of supporters and stakeholders is created in order to quickly mobilize support when needed.  Append any email addresses captured through identification methods to the database to build an email list that can provide supporters with updates. Dialing all households in this database allows for telephone identification, which utilizes a short script to identify additional supporters, opponents and undecideds in the community. Once telephone identification respondents are coded, communications can be targeted to rapidly engage supporters and persuade undecideds. By coding for political affiliation, district, income and any other demographics, this database allows for outreach to be structured like a political-style campaign.

Social media is an important tool that allows for the proliferation of creative content that promotes campaign messaging throughout the social sphere. Content that highlights easily digestible sound bites about project facts or narrative reasons of support from community members can spread quickly to build new support and even generate earned media coverage.  Social media sites that are updated regularly allow supporters instant access to information that can be used to support a project’s cause and create organic grassroots growth in the supporter base.

Advertising on social media is an effective way to reach potential supporters. By geo-targeting ads and highlighting particular interests that would be relevant to likely supporters, Facebook Ads are a way to target a custom audience. This venue for advertising will help add “likes” to a social media page or generate clicks for new impressions on a project website.

Finally, supporters should be guided through in-person group meetings for the purpose of initiating letter writing drives and crafting hearing testimony. Without a coalition of supportive community members and stakeholders to speak to the benefits of the project at hearings and in the news, public officials will only hear the opposition’s side. Quality letters and testimony in support make all the difference when a vote comes about, making it critical to meet with supporters and provide any resources they need for the most effective drives.