Friday, 22 February 2019
0
REM
Eni and RenOils established a consortium in 2016 with the aim of ensuring the correct management of the collection, transport, storage, treatment and reuse of vegetable oils and of exhausted animal fats. Now, they have signed a collaboration agreement to promote the recovery of used vegetable oils. 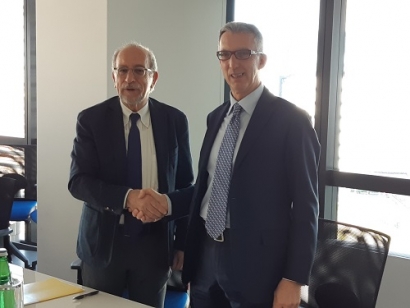 Eni currently makes use of approximately 50 percent of the used cooking oil available in Italy and, in part thanks to RenOils-member regeneration companies, will extend its capacity to produce high-quality biofuel from this waste in the company’s bio-refinery in Venice, at Porto Marghera, and soon also in Gela.

A letter of intent was signed by Giuseppe Ricci, Eni Chief Refining & Marketing Officer, and Ennio Fano, President of RenOils. It also includes information and environmental education campaigns to convey the benefits of reusing oil to produce fuel as an alternative to fossil fuels and awareness-raising projects for trade associations and consumer and environmental associations.

The goal is to increase collection and proper disposal, since used oils from households are currently wasted almost entirely. Around 75,000 tonnes of waste food oil were collected in 2018, almost exclusively from the food service and industrial sectors, which represent just 25 percent of oil produced in Italy, which in turn totals around 280,000 tonnes per year.

The majority comes from homes, and goes down the drain for the most part, since most people don’t know that using the sewage network to dispose of cooking oil can have serious consequences for the environment. As well as clogging domestic drains and the network as a whole, increasing maintenance costs, disposal through the sewage network impairs the correct operation of the purification systems and increases those costs as well

One litre of oil generates up to four kilograms of sewage sludge which can arrive at aquifers and make the water undrinkable and pollute surface water – lakes, rivers and seas – harming the ecosystem, flora and fauna. If it ends up in water, it forms a film that prevents the passage of sunlight, causing huge damage to the environment.

RenOils aims to make an efficient contribution to the Italian system for recycling used oil and to boost collection. There are 254 member associations and companies from the supply chain to date, from food oil producers to recycling and waste recovery organizations.

In collaboration with Tor Vergata University of Rome, RenOils has produced the first used vegetable and animal oils and fats monitoring system for the sector (R_O_S) which operates on a geographical basis and can be used on a web platform. This tracking is fundamentally important for the purposes of the agreement with Eni for reusing vegetable oil to produce biofuel.

The agreement represents one of many Eni initiatives that demonstrate the company’s commitment to promoting a circular-economy. These waste materials will be purified and regenerated, then transformed into high-quality biofuels in Italian industrial facilities, harnessing a national energy resource to the fullest possible extent.