Largest Hydrogen Electrolysis Plant to Be Built in Germany

Thursday, 18 January 2018
0
REM
Shell and ITM Power will partner to build the world’s largest hydrogen electrolysis plant at Rhineland refinery, Germany. With a peak capacity of 10 MW the hydrogen will be used for the processing and upgrading of products at the refinery’s Wesseling site as well as testing the technology and exploring application in other sectors. 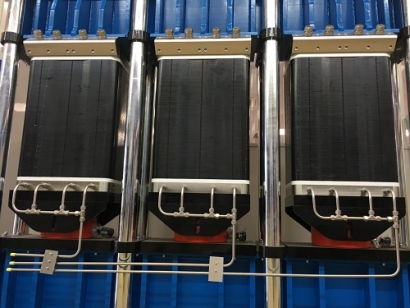 The next step will be detailed technical planning and the approval. The plant, named “Refhyne” is scheduled to be in operation in 2020 and will be the first industrial scale test of the polymer electrolyte membrane technology process.

“This new unit at Rhineland enables hydrogen to be made from electricity rather than natural gas. A unit of this kind brings a flexibility that can help the stability of the power grid, thereby facilitating more use of renewable electricity”, explains Lori Ryerkerk, Executive Vice President of Shell Manufacturing.

Currently the Rheinland refinery, Germany’s largest, requires approximately 180,000 tons of hydrogen annually, which is produced by steam reforming from natural gas. The new facility will be able to produce an additional 1,300 tonnes of hydrogen per year,
which can be fully integrated into the refinery processes, such as for the  esulphurization of conventional fuels.

Bart Biebuyck, Executive Director, EU Fuel Cell & Hydrogen Joint Undertaking, Brussels: "Tthere is now a window of opportunity for these new generation electrolysers to prove themselves in heavy industries like refineries. We are proud to see the scaling-
up of PEM electrolysers to 10 MW to decarbonise the industry sector.”

Hydrogen can potentially play an important role in the energy transition. Hydrogen is already being used in transport by fuel cell vehicles, as well as in industrial applications. Shell is taking part in several initiatives to build up a hydrogen refueling network for transport in a number of markets, including Germany.

The launch of the new facility was attended by numerous representatives from politics and business in the Rhineland refinery:

Tudor Constantinescu, Principal Adviser to the Director-General for Energy at the Commission of the European Union, Brussels, said, "We strongly support innovation activities, and the Refhyne project is a great illustration thanks to the world’s largest PEM electrolyser application in a refinery."