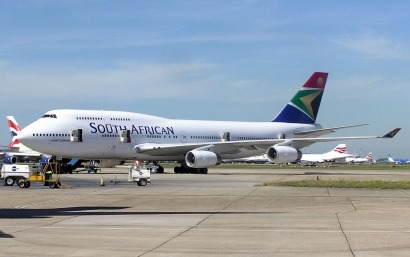 A combined 300 passengers were flown on separate SAA and Mango flights from Johannesburg to Cape Town on July 15 on Boeing 737-800s using a blend of 30 percent aviation biofuel.

The biofuel was produced from a nicotine-free tobacco plant called Solaris created by the South African arm of Italian bio-engineering company Sunchem. The fuel was processed by California-based biofuel refiner AltAir Fuels and delivered by Dutch bio-jet-fuel supplier SkyNRG.

In 2015, the project earned the Roundtable on Sustainable Biomaterials (RSB) certification. The RSB certification provides a model to further expand the production of the Solaris crop in a sustainable way.

South African Airways CEO Musa Zwane said the airline is "the bold steps we are taking to protect and preserve our environment while creating opportunities for the economic development of our people."

To underscore his point, the partnership launched a sustainability plan called the Southern Africa Sustainable Fuel Initiative on July 15, to ensure a long-term domestic fuel supply for SAA and other regional fuel users.

Boeing described the goal of the initiative is “to scale-up over the next several years to gain additional biofuel capacity. If successful, farmers will be able to tap into local and global demand for certified feedstock without adverse impact to food supplies, fresh water or land use.”

"It is fitting that on our 100 year anniversary we are flying on fuels ‎that not only power the flight, but ensure a sustainable future for our industry," said Miguel Santos, managing director for Africa, Boeing International. "This project is a great example of environmental stewardship that delivers economic and health benefits to South Africa."

Studies have shown that sustainably produced aviation biofuel emits 50 to 80 percent lower carbon emissions through its life cycle that fossil jet fuel. Airlines around the world have conducted more than 2,500 passenger flights using various forms of aviation biofuel since it was approved for commercial use in 2011.