Tuesday, 14 January 2014
0
REM
When it comes to biofuels, corn leads the all-important category of biomass yield. However, focusing solely on yield comes at a high price, scientists say. 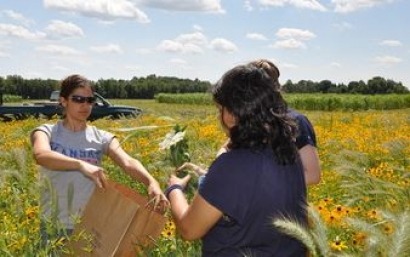 In this week's issue of the journal Proceedings of the National Academy of Sciences (PNAS), the researchers show that looking at the big picture allows other biofuel crops, such as native perennial grasses, to score higher as viable alternatives.

"We believe our findings have major implications for bioenergy research and policy," said Doug Landis, a biologist at Michigan State University (MSU) and one of the paper's lead authors.

"Biomass yield is obviously a key goal, but it appears to come at the expense of many other environmental benefits that society may desire from rural landscapes."

Kellogg Biological Station is one of 26 such NSF LTER sites in ecosystems from grasslands to coral reefs, deserts to mountains around the world.

"Sustainability, food security, biodiversity, biofuel production--all are important to an increasing human population," says Saran Twombly, program director in NSF's Division of Environmental Biology, which funded the research through the LTER Program. "This is a superb example of how fundamental ecological research can assist human well-being."

The scientists measured the diversity of plants, pests and beneficial insects, birds and microbes that consume methane, a greenhouse gas that contributes to climate change.

In addition, the team found that the grass crops' ability to harbor such increased biodiversity is strongly linked to the fields' location relative to other habitats.

For example, pest suppression, which is already higher in perennial grass crops, increased by an additional 30 percent when fields were located near other perennial grass habitats.

That suggests that to enhance pest suppression and other critical ecosystem services, coordinated land use should play a key role in agricultural policy and planning, Landis said.

"With supportive policies, we envision the ability to design agricultural landscapes to maximize multiple benefits," he said.

However, rising corn and other commodity prices tempt farmers to till and plant as much of their available land as possible.

"Corn prices are currently attractive to farmers, but with the exception of biomass yield, all other services were greater in the perennial grass crops," Landis said.

"If high commodity prices continue to drive conversion of these marginal lands to annual crop production, it will reduce the flexibility we have in the future to promote other critical services like pollination, pest suppression and reduction of greenhouse gases."

Scientists from the University of Wisconsin, University of Nebraska, Bard College and Trinity Christian College were part of the research.

The work was also funded by the US Department of Energy and MSU AgBioResearch.