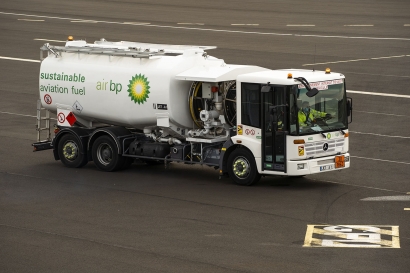 With the aviation industry committed to curtailing lifecycle carbon emissions, sustainable aviation fuel (SAF) has an important role to play. Air bp is already working alongside airlines and airports around the world to deliverincreasing volumes of SAF.

However, while SAF is an integral part of aviation decarbonization, most of the current supply is from a pathway known as HEFA (hydrotreated esters and fatty acids),which includes waste oils and fat, but quantities of these feedstocks are limited. As such, achieving the industry’s low-carbon goals will require a mix of different pathways to produce SAF, including the growth of eSAF.

So, what exactly is eSAF and why is it creating a buzz?

In a nutshell, eSAF, like all SAF pathways,is compatible with jet engines and offers a similar performance to fossil fuels. eSAFis a synthetic fuelderived from renewable energy.

Renewable electricity generated from hydro, solar or wind power is the low-carbon energy of the future. However, we already know that electric-powered flight will only be possible for short-haul journeys in the foreseeable future due to the weight of the batteries required. For larger aircraft and long-haul flights electricity needs to be converted into a synthetic fuel.

One option is to convert electricity into hydrogen, which can then be used as an aviation fuel. The problem here is that hydrogen has an energy-density-per-unit volume that is one quarter of traditional jet fuel1, so a redesign a pathway known as HEFA (hydrotreated esters and fatty acids),which includes waste oils and fat, but quantities of these feedstocks are limited. As such, achieving the industry’s low-carbon goals will require a mix of different pathways to produce SAF, including the growth of eSAF.of much of the aircraft from the propulsion system to fuel storage is necessary, as are changes to airport and refuelling infrastructure.

This is where eSAF derived from power-to-liquid (PtL) technology comes in. Renewable electricity (from sources such as solar, hydro or wind) is used to break water into its components of hydrogen and oxygen via an electrolysis process. Carbon Dioxide captured from the air, or from biogenic or industrial sources, together with this hydrogen are then converted to carbon monoxide and water through the reverse water gas shift process. Using Fischer-Tropsch (FT) synthesis technology, more hydrogen and carbon monoxide is converted into a wax– a sort of synthetic crude oil that can be upgraded to different fuels, including eSAF. Legislation currently allows us to use FT technology to blend eSAFby up to 50% with conventional jet fuel (although in the future it is hoped 100% synthetic fuels will be approved and available)and it can be used as a drop-in fuel.Itcan be easily stored, transported and distributed using existing infrastructure.

The carbon neutrality of eSAForiginates from the fact that the fuel only emits when burnt as much carbon as was input into the production process from direct carbon capture or existing emissions from other industrial sectors.  Electricity from renewable sources is used in the production.

So, what’s stopping eSAF from being produced at scale today?

However, based on the significant role eSAFis expected to play in the future, investment in the development and scaling of these fuels is critical. The good news is there is already legislation in Europe that places the development of eSAF at the forefront of aviation’s sustainability agenda. Germanyfor example has agreed a roadmap which will come into effect in 2026 for the development and use of eSAF for the aviation sector. The European Union proposal ‘Fit for 55’ includes ambitious goals for eSAF starting in 2030 with 0.7% of jet fuel and reaching 28% in 20503.

While these mandates mean initially at least that the cost of eSAF to customers will be around eight times more expensive than fossil fuel and at least twice as expensive as alternative SAFpathways,it’s about creating demand for renewable energy and ultimately driving down the price.As such government mandates willpush the industry to learn faster and move towards reducing the costs on this technology, with eSAF expected to be commercialised after 2030 and more widely available post 2040.

With the price of renewable electricity for hydrogen production, alongside the high cost and logistics of rolling out electrolysers being key challenges with respect to eSAF production and cost, it’s encouraging to see that renewable energy costs have dropped 90% in the last decade. There’s still of course a long way to go.However, with these costs expected to continue decreasing and innovations in carbon sourcing - by securing carbon monoxide from existing industrial sources instead of having to process carbon dioxidefrom the atmospherehelping to cut energy costs by around 30% - it is feasible that eSAF could reach cost parity with other jet fuels, including other SAF pathways.

Meanwhile, further investment in the development of refineries will also help scale production and therefore drive costs down.

Although it’s not going to be easy, Air bp is committed to achieving its net-zero ambitions incorporating SAF strategies through a mix of different viable technology pathways to develop the sustainable fuels of the future. Some regions will prioritise specific pathways with a strong focus on sustainable feedstock and land useas well as low carbon hydrogen sources,resulting in the growth of eSAF and second generation biomass (which uses agricultural and forestry residue as feedstock).Others could favour domestic supply resulting in the production of alcohol-to-jet (AtJ) from ethanol or SAF from municipal solid waste.