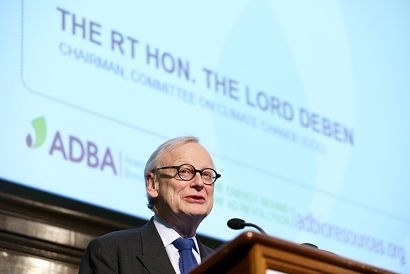 Lord Deben is a renowned environmentalist who gained prominence among green groups by introducing the 1995 Environment Act and Landfill Tax when Secretary of State for the Environment in the 1990s. At the ADBA National Conference 2017, he gave the keynote presentation. The conference brings together AD industry stakeholders with politicians, policymakers, and academics to discuss key issues affecting the AD industry.

“We’ve had a long period in which AD has not been given the advantages it should have been given” said Lord Deben. “AD is not just a mechanism for providing energy but also makes an important contribution to the health of our soils. AD’s story needs to be told much more widely. AD and bioresources are a very important contributor in the fight to rid ourselves of climate change, improve our soils, and eliminate large amounts of waste”.

In a recent foreword for the ADBA’s quarterly member magazine, Lord Deben also described AD as ‘an essential weapon in the war against climate change’ and ‘an increasingly efficient way of completing the system by taking what cannot be reused or directly recycled and giving it real value’. The CCC has previously described injection of biomethane into the gas grid as a ‘low-regret opportunity’.

The ADBA National Conference 2017 also featured the launch of ADBA’s AD Certification Scheme, as well as panel sessions on the role of AD in farming, transport, and renewable heat and on different food waste collection systems.