Thursday, 25 August 2011
0
REM
Having gained consent from Berlin’s Senate Department for Health, Environment and Consumer Protection in July, the German waste collection service provider, BSR Ruhleben, has commenced construction of a biogas plant in Berlin-Westend. The facility will ferment organic waste to produce biomethane to power its fleet of refuse collection trucks. 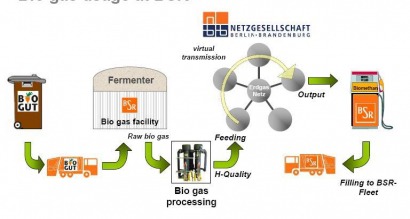 “About half of all collective kilometres of BSR in the future will be accomplished as climate-neutral. This usage also makes us less dependent on – predictably upward trending – price development of fossil fuels,” Gade-Butzlaff explains. By the end of 2012, and every year thereafter, the biogas generated from organic waste by BSR will be the equivalent to reducing carbon dioxide emissions by more than 5,000 tonnes. When utilised as a diesel-substitute, the company reveals that the biomethane (upgraded biogas) it will produce will be tax free until the end of 2015.

During her speech at the ground-breaking ceremony, Senator Lompscher said the use of biomethane to power the company’s fleet will also contribute to reducing noise and dust pollution, since “the biogas garbage trucks emit no diesel and they are clearly quieter than conventional diesel vehicles”.

In a climate protection agreement set for the 2005 – 2010 period, BSR was hired by Berlin city council as the first municipal company to set ambitious climate targets. The company aimed to reduce carbon dioxide emissions by 121,000 tonnes and build a fleet of fully equipped low emission waste collection vehicles. As the final report of this agreement showed, the goal was not only met but exceeded, with the saving equivalent to 130,000 tonnes of carbon dioxide being achieved.

BSR has operated a fleet of 50 Daimler CNG waste collection trucks, a filling station and a CNG fast filling a mobile station that has been operational since 2002, also adding another 30 vehicles and a second Fast Fill station in 2010. It plans to expand the fleet of 140 CNG vehicles and build another fast-fill CNG station in 2012.