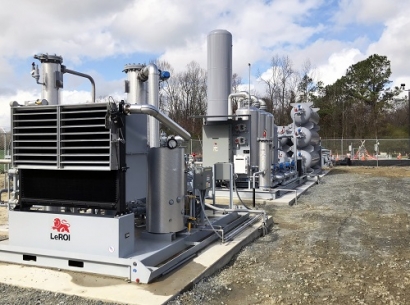 Sometimes called directed biogas, the Optima KV project in Duplin County captures methane gas from the hog waste of five local farms. Using more than 42,000 feet of in-ground piping, the methane is moved to a central location where the gas is cleaned and converted to pipeline-quality natural gas.

The project injects the renewable natural gas into the Piedmont Natural Gas system which transports it to Duke Energy’s Smith Energy Complex in Richmond County where it is used to produce electricity. Optima KV completed its interconnection to Piedmont Natural Gas last week.

“Biogas is such a rich resource for the state, especially for North Carolina’s agriculture industry,” said Gus Simmons of Cavanaugh & Associates, a partner of OptimaBio. “Harvesting unused organics such as swine manure from farms can create a new business opportunity for farmers, provide an in-state source of energy fuel and improve the sustainability of the agriculture and energy sectors. It’s a win-win.”