Friday, 09 November 2018
0
Dan McCue
Enagás has signed an agreement with Ence to develop projects to obtain renewable gases from biomass. The agreement was signed by CEO of Ence, Ignacio de Colmenares and  Managing Director of Enagás, Marcelino Oreja. 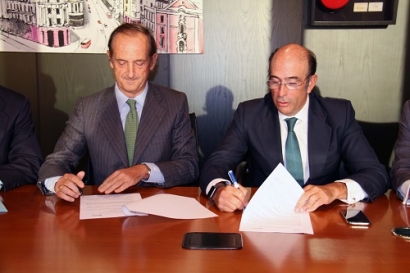 The objective is to take advantage of biomass surplus to generate green hydrogen and synthetic natural gas. These non-electric renewable energies can be used in industry, mobility or be injected directly into the network of gas pipelines able to transport this type of renewable gas. In addition, they can be stored in already existing gas infrastructures.

Enagás has also signed an agreement with the Government of Aragon (in northeastern Spain) for the development of renewable gases such as hydrogen and biomethane (RNG).

The agreement is part of the Government of Aragon’s objective of promoting energy saving and efficiency and the use of renewable energies.

The government also included in the agreement the promotion of a coherent and efficient development of energy infrastructures. In this sense, the regional government, through the Hydrogen Aragon Foundation, maintains its commitment to the development of hydrogen technologies and fuel cells.

The collaboration of the Government of Aragon, through the Hydrogen Aragon Foundation, and Enagás will allow promoting projects, research, development and innovation in areas such as sustainable mobility or the production of renewable hydrogen.