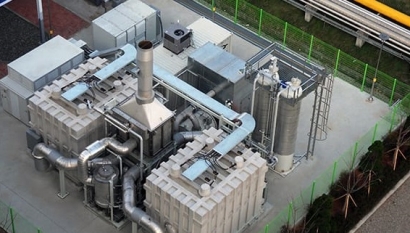 Using biogas began with the company’s very first commercial power plant shipment in 2003.  That first 250 kW system operated on digester gas at a Kirin Brewery in Japan.  A year later the company started the first prototype of today’s 1.4MW SureSource 1500 at the King County Wastewater Treatment plant in Renton, Washington.  In subsequent years, the company has deployed over 20 MW of fuel cell systems operating on renewable biogas at wastewater treatment facilities agricultural facilities and breweries in California and around the world, leading up to the recently commissioned 2.8 MW Tulare project and the in-development 1.4 MW San Bernardino project.

FuelCell Energy’s continued focus on innovation led to a series of improvements in the gas cleaning and purification techniques the company uses to execute on-site biogas applications, leading to the best in class solution for clean power generation from this abundant and ever growing renewable resource.  Some of the key advances developed through this extensive experience include the following:

The U.S. Department of Agriculture has previously estimated the potential for electricity generation from biogas in the United States is 4.7 GW, consisting of 0.6 GW wastewater, 2.6 GW landfill, and 1.5 GW agricultural1.  The World Biogas Association estimates the global potential for wastewater and landfill gas opportunities to be 40 – 50 times that of the United States, and the agricultural potential more than 200 times.2  Only a fraction of this potential is currently being used for power generation, meaning that biogas methane is being vented or burned in flares, negatively impacting the environment.  Widespread application of on-site biogas power production using the advanced technologies developed at FuelCell Energy can eliminate this waste and contribute to global decarbonization objectives.