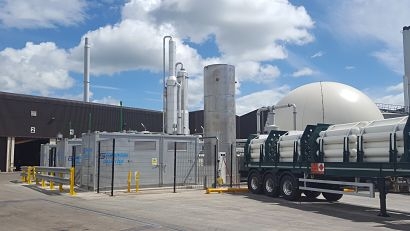 The Northern Irish plant treats organic waste in order to generate renewable energy. ADCS is an industry-led initiative that recognises good operational, environmental, and health and safety performance at AD plants. It was launched six weeks ago at the Anaerobic Digestion & Bioresources Association (ADBA) National Conference following a successful pilot earlier in the year involving three different AD plants. The scheme has been developed in collaboration with a range of industry stakeholders including regulators, insurers, investors, and operators and is managed by ADBA, the UK trade body for AD.

Granville Ecopark is the largest AD facility in Ireland taking only food waste as a resource and has capacity to export 4.8 MWe of renewable electricity onto Northern Ireland’s local grid. Recent expansion now allows the plant to clean up excess biogas into biomethane, which is being transported all over Northern Ireland to power CHP engines and create renewable heat and electricity for its customers.

“We are delighted to be the first UK AD plant certified under this new scheme” said David McKee, Technical Director at Granville Ecopark. “It gives us the confidence that we are attaining the highest standards within the industry and will drive us forward to remain at the top. We hope that others will now follow in our footsteps and apply for certification to help boost their environmental credentials and further highlight how important the AD industry is for the future of renewable energy throughout the UK.”

Charlotte Morton, ADBA Chief Executive, added that to have the first plant certified under the ADCS just six weeks after the scheme was launched is hugely encouraging and shows the support within the AD industry for raising its performance across the board and recognising good practice in running plants. ADBA will continue to speak to AD operators about the many benefits of the ADCS both for operators themselves and for the wider industry, including increased support from politicians, regulators, insurers, and investors.

In September 2017 Granville Ecopark also became the first AD plant to obtain a Prosperity Agreement with the Northern Ireland Environment Agency whereby the two parties have pledged to work together to develop innovative solutions to maximise energy production and work with the community to deliver environmental initiatives. Amidst this success Granville Ecopark has also been recognised as Market Development leaders with a prestigious award from Sustainable Ireland for its work in food waste and the circular economy.