Thursday, 29 April 2021
0
Robin Whitlock
Iona Capital has agreed a landmark deal with King’s Cross in London which will see the 67-acre estate switch entirely to green gas, meaning that all the heating and hot water for the estate’s 2,000 homes, 5 million square ft of offices, retail and dining space will be powered by green gas. 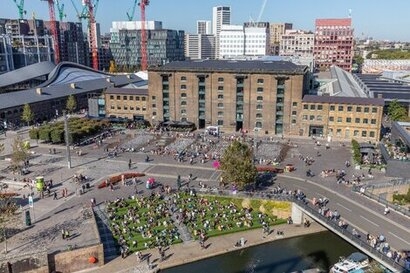 By switching its gas supply to green gas, King’s Cross will reduce its carbon footprint by around 50 percent and save 20,000 tonnes of CO2 per annum from being released into the atmosphere, equivalent to the average annual carbon emissions of around 2,000 Londoners.

The deal, which has been facilitated and managed by Optimised Energy, will see an Iona Capital owned plant in Scotland supply 40,000 MWh of green gas each year to King’s Cross. The plant generates green gas from an anaerobic digestion, where farm animal slurries and residues are broken down to produce clean energy.

King’s Cross will use the green gas to supply its on-site energy centre, operated by Metropolitan, specialists in low carbon district heating systems. The energy centre efficiently generates heating and hot water for the whole of King’s Cross using large boilers and by capturing the heat generated by the Combined Heat & Power engines which provide renewable electricity for the estate. Metropolitan Kings Cross distributes heating, hot water and electricity to its occupiers and businesses using its estate-wide district energy network.

The deal between King’s Cross and Iona Capital has been independently certified by Green Gas Trading Limited to ensure that the gas is 100 percent renewable, whilst Optimised Energy will verify that the green gas is for the consumption of the King’s Cross estate only.

“We are delighted that we’ve agreed this deal with King’s Cross to supply sustainable energy to a prime London development” Alexander Todhunter, Investment Director at Iona Capital. “This is part of a number of initiatives we are working on across our portfolio to deliver certified green energy direct to end users whilst giving long term energy price certainty for consumer and generator.”