Tuesday, 29 November 2011
0
Toby Price
Sweden is committed to meeting its binding renewable targets for 2020, and as part of this effort has turned to biogas for transport. A train service running between Linkoping and Vastervik is powered by biogas produced using waste from a local abattoir. 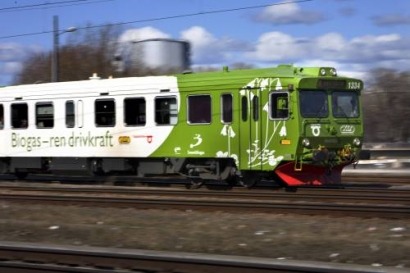 The company Svensk Biogas has revealed that it is operating the first biogas-fuelled train service in Sweden, and may be in the world. The train was built by Fiat in Italy in 1981, after which it had a major refit in 1994. The train has been in service on the Tjustbanan (Linkoping - Vastervik); one of Sweden’s most beautiful stretches of rail track, since 2005.

The train refuells in Vastervik and forms part of a growing local biogas market, which includes a 65-strong fleet of buses, and several taxis and rubbish trucks in the town of Linkoping. The train has a range of 600 kilometres.

The biogas used by the train is produced by decomposing waste meat from a local abattoir in an oxygen-free environment over around 30 days. The gases formed in this process, mostly methane and carbon dioxide, arte then collected and the methane content boosted to around 97 %, which is done by removing most of the carbon dioxide, to allow it to be used as engine fuel. Biogas production is located at Vastervik’s sewage treatment plant, Lucernaverket.

Svensk Biogas is a 100 % owned subsidiary of Tekniska Verken i Linkoping AB (publ). The company’s mission is to promote the development of biogas regionally by marketing its production of vehicle fuel gas and bio-fertiliser as well as the process development and biogas production concepts based on both farm produce and organic waste as raw materials.