Thursday, 16 December 2021
0
REM
Scandinavian Biogas plans to build a plant for the production of liquid biogas (Bio-LNG) together with local farmers in Grimhult outside Mönsterås about 370 kilometers south of Stockholm, According to the plan  the construction will commence during the first half of 2022 and production is planned to begin in 2024. 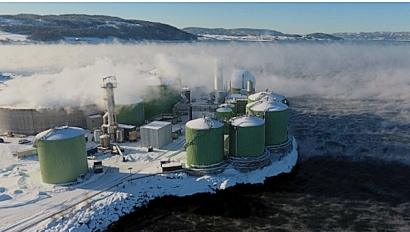 The project development in Mönsterås began in 2016 by local farmers. The cooperation with Scandinavian Biogas began in 2018. The biogas plant is placed to Mönsterås due to the high density of animal farms in the area. The facility should convert 300,000 tonnes of dung from local pigs, nut and poultry into about 120 GWh of liquid biogas (Bio-LNG) that can be used as fuel in trucks and ships, or in the industry. For comparison, 120 GWh corresponds to an amount of energy of 12 million liters of diesel. In addition to biogas, the facility will produce high-quality bio fertilizer for both local use and for sale to other areas. This means that local farmers can develop their activities within the framework of their environmental permits.

The Swedish Environmental Protection Agency's decision to support the project is based on the requirement that the funds invested should provide the greatest possible emission reduction per invested money. When the biogas is manufactured from manure, a very high carbon dioxide reduction is achieved. As the fertilizer's normal methane emissions are also greatly reduced, the environmental profit is significant. Methane is a significantly more damaging greenhouse gas than the carbon dioxide.

"This is a big step towards an investment decision says Michael Wallis Olausson, business area executive Sweden at Scandinavian Biogas. We have worked for a long time with the project, and it is good to see that we close to the final decisions. The Mönsterås farmers need the project to develop in line with increased climate benefit".

"The decision is very good for the environment, for agriculture and for the possibility of locally produced food. It also shows that the Swedish Environmental Protection Agency and Region Kalmar believe in the project and our ability to implement it. For Scandinavian Biogas, this is an important step in the implementation of the Group's growth strategy, "says Matti Vikkula, CEO of Scandinavian Biogas