Wednesday, 08 January 2020
0
REM
Smithfield Foods, Inc, in partnership with Duke Energy and OptimaBio, is now producing renewable natural gas (RNG) from the wastewater treatment system at its Tar Heel, North Carolina, pork processing facility, which will help power more than 2,000 local homes and businesses. The three companies are utilizing the world's largest pork processing facility to provide renewable energy to consumers while reducing their own, and the state of North Carolina's, carbon footprint. 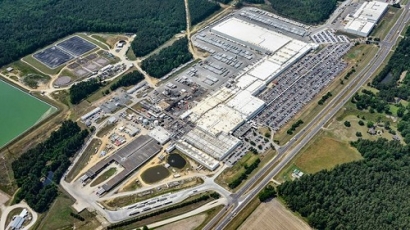 The $14 million project is the latest from Smithfield Renewables, Smithfield's platform to unify and accelerate its efforts to reduce greenhouse gas (GHG) emissions 25 percent by 2025. Through partnership with Duke Energy, roughly 140,000 dekatherms of RNG per year will be transported to natural gas plants and used to generate electricity for consumers.

"This project brings to life all three of our company's guiding principles - Responsibility, Operational Excellence, and Innovation," said Kenneth M. Sullivan, president and chief executive officer for Smithfield Foods. "For the first time, we are creating renewable energy from the biogas generated in our wastewater treatment system and using it to power local communities."

To date, this is one of Smithfield's largest renewable energy projects involving wastewater, and its first in North Carolina. Smithfield also has "wastewater-to-energy" projects at its Milan, Missouri; Grayson, Kentucky; and Sioux Falls, South Dakota, facilities, which are used to power their modified steam boilers.

The company's Tar Heel project utilizes a gas upgrading and injection system operated by OptimaBio, a bioenergy project developer, which leverages the facility's three million gallon-per-day wastewater treatment system to collect and clean biogas through an existing on-site digester and convert it into RNG.

Once converted, the RNG is injected into the Piedmont Natural Gas system, and then transported to Duke Energy to produce electricity. This project will help Duke Energy satisfy state swine waste-to-energy mandates under the Renewable Energy and Energy Efficiency Portfolio Standard law in North Carolina. Under this law, Duke Energy must generate 0.20 percent of its retail sales from swine waste by 2024.

In addition to creating renewable energy at its facilities, Smithfield is implementing projects on its farms that transform manure into RNG. These projects capture methane from manure, and clean and convert it into RNG, which is then injected into local natural gas distribution systems for homes and businesses. In the next decade, Smithfield is implementing "manure-to-energy" projects in at least six states including Arizona, California, Missouri, North Carolina, Utah, and Virginia.