UK Military Base to Go Green with 95% Renewable Energy

Wednesday, 30 January 2019
0
REM
Home to the frontline squadrons of the RAF's elite Tornado Force, RAF Marham in the UK is set to become the first British military base to run nearly entirely on green energy. Over 95 percent of its electricity is now to be fuelled by the anaerobic digestion of locally-grown crops in a nearby Norfolk plant - built and run by Future Biogas. 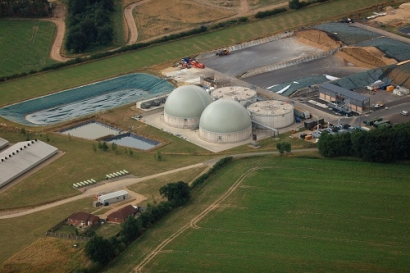 In the AD process, specially-cultivated bacteria are added to tanks filled with harvested crops, like maize, sugar beet, rye or potatoes. As the bacteria  breaks these down, they release gas, which is siphoned off. It can then be supplied directly to the National Grid as green gas or, as is the case for RAF Marham, burnt to produce electricity. The leftover organic waste from this process is then dried, separated and used as natural fertilizer to help grow more crops.

On January 31, 2019, this landmark green energy partnership, signaling the UK military's transition away from fossil fuels, is to be marked by a launch at RAF Marham.

The AD plant - Redstow Renewables in Swaffham, Norfolk - generates 4.5 MW of electricity every hour, which can power 350,000 LED bulbs. Its new green energy supply to RAF Marham will result in an annual reduction of emissions by 14,000 tonnes of carbon dioxide. It will also deliver approximately  £300,000 of annual electricity savings.

"It's fantastic to see the UK military join the green revolution," commented Philipp Lukas, founder and managing director of Future Biogas. “If we are to combat the imminent global threat of climate change, everyone, from all walks of life, needs to transition to renewable, sustainable energy as quickly as possible.”

The plans for this venture have been in development since February 2015. The Defence Infrastructure Organisation (DIO), the part of the Ministry of Defence that manages the Defence Estate, has collaborated with colleagues at Future Biogas, energy company EDF and Crown Commercial Services, the government's procurement agency, to develop a green,
sustainable and cost-effective electricity supply for RAF Marham.

At the outset the DIO undertook a feasibility assessment, to assess the benefits that could be derived from a clean energy supply. As well as saving money and reducing carbon emissions, it was determined that connecting to the AD plant would increase power resilience at RAF
Marham, by providing multiple pathways to electricity.