Waste-to-Energy Plant to be Built in New Zealand

Monday, 15 July 2019
0
REM
New Zealand’s first large-scale, waste-to-energy plant was recently announced by Minister Shane Jones at T&G’s covered crops facility at Reporoa today. The proposed purpose-built facility will take food waste from the region (and from T&G’s tomato vines) and turn it into renewable biogas energy which can then be used to enhance growth in glasshouses and power up the region. 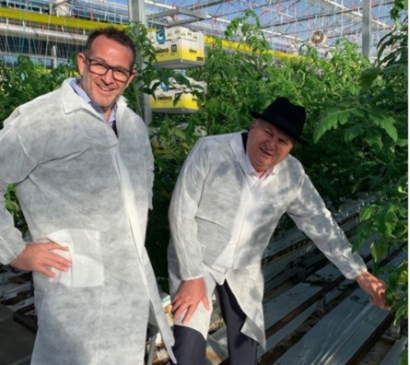 Sustainable food waste recyclers, Eco Gas Limited Partnerships, received a loan of $7 million from the government to build a full-scale demonstration biogas plant in Reporoa which will recover energy, carbon dioxide and nutrients from food waste.

“Every year 327,000 tonnes of food waste goes to landfills in New Zealand which could be turned into biogas energy to fuel an engine for electricity or heat, as well as help us achieve lower carbon emission targets. Biogas plants are common overseas, particularly in Europe, but this will be the first waste to energy plant of this scale in New Zealand. If it proves commercially successful, it has the potential to act as catalyst for others being set up in regions nationwide,” Jones said.

The proposed Reporoa Organic Waste Recovery Facility will be built on two hectares of land adjacent to T&G Global’s tomato glasshouses. T&G Global will buy the renewable energy and also supply its own organic waste, around 1000 tonnes of tomato vines per year.

“The facility will take more than 20,000 tonnes of organic food waste a year from major local food manufacturers such as dairy factories, commercial bakeries, cool stores, milk sheds and fruit grading facilities from Reporoa, and surrounding areas, Taupo and Rotorua, to convert into biogas,” Jones said.

T&G Global, a BayWa company, is thrilled to partner up with Eco Gas (a joint venture between Ecostock and Pioneer Energy) to bring more sustainable fresh produce to consumers.

“Like all growers in New Zealand and around the world, we know the challenges of a changing climate and the need for us to utilize renewable, circular solutions to support our planet leave a lighter footprint on the planet,” T&G Managing Director NZ Produce, Andrew Keaney said.

He said discussions began several years ago after Ecostock approached T&G about the potential of an anaerobic digestion plant, which had already been commercially proven overseas. At that time, T&G was investigating alternative solutions to its heating and CO2 needs in its glasshouses.

“Having had a relationship with Ecostock for nearly five years, that saw Ecostock collect T&G’s our existing food waste from their Auckland site and turn it into animal feed, we were excited and keen to explore this opportunity further.”

Keaney said this seemed the perfect solution – "to take 1000 tonnes of organic waste from our tomatoes, turn it into renewable, biogas energy, power up our glasshouses with natural heat and enhance the growth of our tomatoes with CO2."

“The initiative allows us to utilize our waste products, use renewable energy to power up our glasshouses and our tomatoes, and be part of future growth in the region,” he concluded.