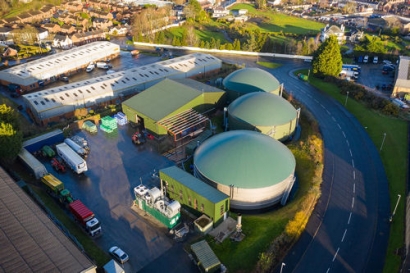 At the site in Lisburn, south of Belfast, 450 standard m³ of biogas will be processed into biomethane/ RNG every hour. With this amount, the logistics company can operate ten new CNG trucks, which are refueled directly at the company‘s new biomethane filling point. The substrates for the production of the green fuel come from the 41 Lidl supermarkets in Northern Ireland.

Ashley McCulla, chairman of the transport company of the same name, was able to commission the first stage of his biogas plant from WELTEC BIOPOWER back in January 2017. The intention at the time was to utilize the residual materials from his own agricultural business and to create synergies through the use of renewable electricity and heat in the refrigerated warehouse at their main logistics depot.

"By digesting slurry, agricultural residues and grass silage from our farm, we were able to produce green energy ourselves with a 500kW CHP plant and use it on our company premises. Ultimately, this has significantly improved our carbon footprint,“ McCulla sums up. The expansion to biogas upgrading, HGV fuel and becoming Ireland’s greenest fleet was the logical next step of this good experience with the AD plant and their network in the food industry.

As one of Northern Ireland‘s largest food transport companies with 235 employees and a cold storage facility of almost 8,500 square metres, McCulla has been supplying Lidl Northern Ireland‘s supermarkets for years. With the conversion of the biogas plant, 17,500 tons per year of food leftovers from Lidl stores will substitute the agricultural residues as substrate for the HGV fuel production.

"Every lorry that runs on the green fuel emits 93 percent less carbon  emissions than a diesel truck,“ explains chairman McCulla. Due to the excellent eco-balance, the reduced emissions and the lower dependency on fossil fuels, the deal between Lidl and McCulla is creating a positive response from all parties involved.

In the course of the extension, WELTEC BIOPOWER upgraded the in-house developed LoMOS PLC-based control system.

"We also retro-fitted the extra gas lines, installed a second emergency flare and ensured that all components were connected smoothly with no downstream consequences on the original plant, which since com- missioning has shown some of the top performance figures in the industry," WELTEC Sales Manager Dr. Kevin Monson explains.

"Last but not least, our Biology Department guaranteed a trouble-free substrate changeover, more than doubling output from the original 500kWe plant without further investment in digestion space, by switching from grass silage and slurry to food wastes," adds Monson.

The biogas upgrading system comes from Pentair Haffmans. The tried and tested module separates carbon di- oxide and other components of the biogas from methane using membrane technology.

This creates biomethane that is similar in its properties to natural  gas, but is significantly more climate-friendly. Despite processing 450 standard m³ of biogas per hour, the 500-kilowatt CHP continues to run, because McCulla can use the electricity and heat for his headquarters and the cold store.