Thursday, 04 November 2021
0
REM
Xebec has acquired Colorado-based UECompression which was founded in 1983. UEC is a premier designer and builder of custom air and gas compressor solutions for power generation, industrial and energy applications. 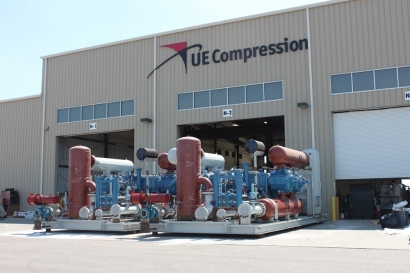 The acquisition of UEC provides Xebec with a cost-effective and timely pathway towards expanding production capacity five-fold for standardized renewable gas systems while supporting UEC’s legacy business as the operation continues its energy transition.

In addition, Xebec’s global manufacturing footprint is further optimized by bringing European gas generation products such as Hy.GEN to the U.S. and focuses UEC’s facility on containerized and skid-mounted renewable energy systems. Furthermore, the acquisition increases the Cleantech Service Network coverage by six states (Montana, Wyoming, Colorado, North & South Dakota and Nebraska) to meet the increasing need for local service and support as the demand for standardized RNG and hydrogen systems accelerates.

Xebec expects that with limited changes to operations it can use UEC’s excess capacity to produce approximately 150 to 190 containerized BGX Biostream™ biogas upgrading and Hy.GEN hydrogen units per year in North America. The new capacity from UEC adds to recent capacity increases in Xebec’s Canadian manufacturing facility.

“UEC helps Xebec solidify its position as a leading renewable gas player by adding a 100,000 sq. foot manufacturing facility in the U.S. With this acquisition, we are responding to the accelerating energy transition and the associated interest in containerized RNG and hydrogen systems. Furthermore, UEC’s existing compression expertise in hydrogen will become increasingly relevant as the hydrogen economy develops. The acquisition will also help us in fully complying with current and evolving needs for local sourcing,” said Kurt Sorschak, Chairman, President and CEO, Xebec Adsorption Inc.

The total consideration for the acquisition of the outstanding shares of UEC is of $8 million  and is subject to certain holdbacks and adjustments. On a standalone basis, UEC is expected to have unaudited revenues of approximately $35.0 million for 2021. With the introduction of containerized renewable natural gas and hydrogen systems and leveraging the Cleantech Service Network to support UEC’s and Xebec’s installed equipment base, Xebec expects to see significant growth for this operation over the coming years.

Significant capacity increase to support the growing U.S. animal manure RNG market
According to the United States Department of Agriculture and National Pork Producers Council, there are approximately 92,000 active dairy and hog farms in the U.S. The American Biogas Council estimates that approximately 8,574 of these farms are primed for biogas and renewable natural gas production with more than 98 farms already producing RNG for the local transportation market.

Xebec is focused on serving animal manure-based projects because of their ability to reduce emissions from agriculture, support local communities and recycle nutrients. Biostream is well positioned as a market leading solution for animal livestock operations as showcased with orders from top U.S. dairy developers which include an initial 18-unit order from the Brightmark and Chevron RNG partnership.