Thursday, 10 November 2022
0
REM
Widnes-based Esken Renewables, the UK’s largest supplier of biomass fuel, unveiled a new truck and trailer with Remembrance Day livery. The new vehicle, which is used to supply waste wood to biomass plants across the UK, will also be named Elizabeth, in recognition of the late Queen who was head of the UK’s armed forces for over 70 years 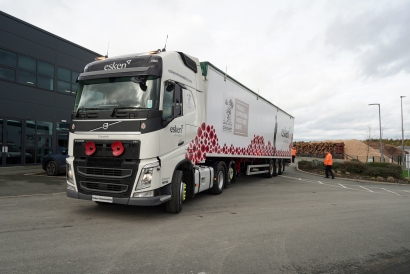 Approximately 10% of Esken Renewables employees are ex-armed services and the team wanted to do something special to recognise the huge contribution that the armed forces have made to the UK.

Esken Renewables is an Armed Forces Covenant Gold Award Holder and the freshly liveried truck and trailer was unveiled at a ceremony attended by representatives from the Reserve Forces’ & Cadets’ Association for the North West of England & the Isle of Man, Ministry of Defence, and No 611 (West Lancashire) Squadron, Royal Auxiliary Air Force, Royal British Legion along with the Honourable Derek Twigg MP and Mayor and Mayoress of Halton.

The ceremony, held on November 10 and also attended by Esken Renewables’ ex-armed forces employees, and representatives from Volvo and STAS Trailers, included a minute’s silence to reflect on the service and sacrifices the Armed Forces make on our behalf.

Going forward, the truck and trailer will be driven by Barry Fairhurst, a former armed services person who served with Royal Corp of Transport up until 1990.

Richard Jenkins, CEO of Esken Renewables said, “We are honored to have so many ex-armed service people working for the business. Armed forces personnel bring a wide variety of skills, particularly in terms of logistics. It is important that we recognize the contribution made by the armed forces, particularly at times of Remembrance.

"The team came up with the idea of a new livery for one of our vehicles, and I think it looks great. It will now be seen up and down the country as it travels to supply biomass fuel to our customers.”