Friday, 10 August 2018
0
Robin Whitlock
The 2018 Asian Games, being held in Jakarta and Palembang, Indonesia, from 18th August–2nd September will see hydrogen-powered vehicles demonstrated throughout the duration of the games. 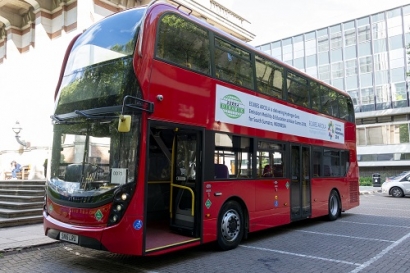 The vehicle demonstrations will be delivered by integrated energy infrastructure provider and zero emission mobility provider, Ecubes Arcola. It's now possible to enable a high penetration of renewable energy technologies to the global power mix and some of this can be provided by hydrogen-based transport and storage through cross-sectoral power infrastructure integration.

The demonstrations will be supported by Imperial College, one of the world’s top ten universities. Ecubes Arcola will also be running a week-long education roadshow in Indonesian cities, providing hands-on technology workshops for over 1,000 young people in South Sumatra and Java, plus open-access displays for all visitors to Jakabaring Sports City, home to many of the Asian Games venues.

The programme is part of a wider Ecubes Arcola strategy to delivery hydrogen-powered, clean
energy infrastructure across the region via complementary projects across the power generation and supply and transport sectors, based on the technology.

"Delivering solutions for sustainable energy world is no longer a matter of overcoming technological obstacles, but about leadership challenges" said Aleksander Gerbec, President Director of Ecubes Arcola. "South Sumatra is showing strong leadership in developing a green economy, as indicated by pioneering solutions based on hydrogen related technologies since 2016".

Alongside activity at the games, a media event took place today (10th August) at the Foreign and commonwealth Office in London, promoting clean energy Investments in Indonesia and marking the practical launch of the partnership between Ecubes Arcola and the sponsor of the Asian Games Education programme in the ASEAN region, Serba Dinamik.

The event also showcased the cutting-edge of UK zero-emissions technology with a demonstration of a double decker hydrogen fuel cell electric bus, developed by Arcola Energy using an Alexander Dennis base vehicle, making a journey to Westminster.

The programme’s mission in Indonesia, is to demonstrate the way power infrastructures can be designed to enable clean, affordable energy, and clean air, for everyone. The programme is already starting to provide exciting opportunities for the development of a new, low carbon, circular economy in Indonesia. The programme for the 2018 Asian Games is a precursor to the 2020 Tokyo Olympics where hydrogen-enabled power and transport will be a key part of the infrastructure.