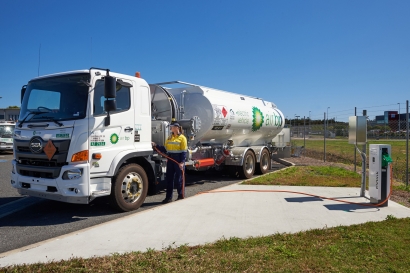 The refueler was put into operation on August 30, 2022 at Brisbane Airport. Attending on the day, was Catherine King MP, Federal Minister for Infrastructure, Transport, Regional Development and Local Government, who spoke more broadly about decarbonizing the aviation sector.

This refueler uses Lithium-Ion batteries and digital charging mechanisms making it the first all-electric hazardous goods vehicle and refueller approved for use in Australia.

The refueler can carry approximately 16,000 litres of fuel and has been designed to operate for a full day with overnight charging. Air bp also anticipates that the electric refueler will reduce bp's operation and maintenance costs when compared with similar diesel-fueled refuelers.

The refueler was manufactured in collaboration with SEA Electric, a global leader in e-mobility solutions which provided the electric power system and Refuel International, a global manufacturer and supplier of specialized refuelling vehicles, equipment, and support services to the aviation industry.

Speaking at the launch event at Brisbane Airport, Daniel Tyzack, Managing Director, Air bp Asia Pacific said, "Air bp has been collaborating with SEA and Refuel International for two years on the custom-designed and specialised electric refueler to meet exacting performance and safety requirements. We are delighted to launch the refueler at Brisbane Airport where we are responsible for fueling 30 airlines and approximately 100 flights daily. Our work reflects bp's ambition to become a net zero company by 2050 or sooner and to help the world get to net zero by working with our customers to help decarbonise fueling operations."

"SEA Electric is proud to be partnering with bp on this world-leading project," said Tony Fairweather, CEO and founder SEA Electric. "By successfully producing our first SEA 500 aircraft refueling truck complete with an SEA-Drive® 120-35 fully electric power system, we have opened up an entirely new application that helps set the standard for environmental credentials."

"Refuel International are very proud to have developed Australia's first all-electric aviation refueler in partnership with Air bp and SEA. Refuel International have been Air bp's builder of choice in Australia for over twenty years and this relationship has led to this significant achievement. This refueler delivers to the aircraft with zero fuel consumed and zero tail pipe emissions whilst meeting the requisite levels of safety and regulatory compliance," Geoff Pinner, General Manager for Refuel International.

This announcement builds on Air bp's experience in launching the world's first electric refueler in 2002 at Long Beach, California, and its introduction of the first generation of electric hydrant dispensers at Brisbane airport in 2005; which are still in operation at Darwin and Perth airports.

This reinforces Air bp's commitment to its carbon reduction plan, including global carbon neutral accreditation for Air bp's refuelling activities across its operated sites and is also proudly certified under the Australian Government's Climate Active program.

Over time, it is Air bp's intention to introduce the refueller at other Air bp operated sites