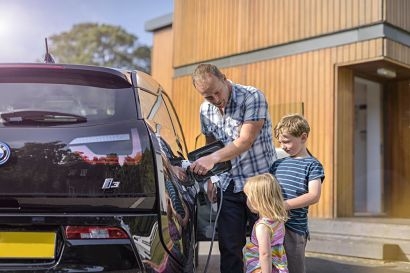 DriveElectric, which has over 20 years of leasing and electric vehicle experience, is celebrating the breadth of valuable learning gained about smart charging, and in particular the behaviours of EV drivers, from its involvement in the Electric Nation trial. The company recruited 700 EV drivers to take part in the three-year project and managed the process of installing smart chargers at participants’ homes, as well as being responsible for all customer-facing activity. Half of the EV drivers also trialled DriveElectric’s Crowd Charge app, which enabled people to interact with the smart charging system.

Electric Nation, the world’s largest home smart charging project – with the trial element carried out over 18 months - has announced the project results at today’s ‘Smart Charged’ conference at the British Motor Museum, Gaydon. The project involved the collection of data to expand understanding of the impact of the home charging of EVs on local electricity networks, and to evaluate the reliability and acceptability of smart charging to EV owners.

As the numbers of electric vehicles on the UK’s roads are set to rise, the final results of the Electric Nation trial show that smart charging combined with time of use electricity tariffs can help to manage the potential impacts of EVs on the domestic (low voltage) electricity network and save EV drivers money.

During the trial, data was collected for more than a million charging records, showing that the most popular times to plug in EVs is during the evening peak (5pm – 7pm) on weekdays, when the majority of drivers get home from work. On average, vehicles are plugged in for over 12 hours, but they only take electricity for 1.5 hours in that time. This shows that there is sufficient flexibility to manage charging away from peak electricity demand periods.

The trial has also proven that managing demand from EVs through smart charging is technically feasible, and that it is acceptable to the majority of trial participants.

Time of Use incentives – such as cheaper electricity rates at off-peak times - appear to be highly effective at moving demand away from the evening peak, particularly when supported by smart charging (with an app), which makes it simple for the user. If there is no incentive, the EV charging demand in the evening peak requires management.

Smart charging can support the introduction and management of Time of Use-based charging. It can also provide a means to manage any negative consequences of mass uptake of Time of Use incentives, ie. in the event that such incentives resulted in a peak in charging at the time when cheaper tariffs start.

The Electric Nation project is hosted by Western Power Distribution (WPD) and delivered by a partnership of EA Technology, DriveElectric, Lucy Electric GridKey and TRL. The project is funded via Ofgem through its Network Innovation Allowance scheme. The trial took place in the WPD network areas in the Midlands, South West and South Wales.

“The Electric Nation project shows that smart charging can help to reduce the load on the grid from EVs at peak times, and there has been an overwhelming positive attitude towards smart charging from participants” said Mike Potter, Managing Director and Founder at DriveElectric. “We have also trialled our Crowd Charge app and this has proven that the platform works and that EV owners can benefit from lower cost and lower emission electricity without changing their use of their EV.”

The Electric Nation smart charging trial recruited almost 700 EV owners, with more than 40 different makes and models of plug-in vehicles, including battery electric vehicles and plug-in hybrids (PHEVs) with a selection of battery sizes. The project monitored participants’ charging habits to gather data on plug-in behaviour including frequency, length and amount of energy consumed. The trial concluded with participants being financially incentivised to change their charging behaviour, producing clear indications that this could be a successful strategy for addressing distribution network congestion issues that could be created by home EV charging.

Other conclusions from the project suggest that the average charging event for a pure EV starts with the battery already more than 50 percent full, and the average EV owner only charges their EV three times a week. This is more frequent for plug-in hybrids, but PHEVs consume less power for shorter periods.

As part of the Electric Nation project, DriveElectric is also running a mini feasibility trial to investigate the impact on driver experience of the first single phase, home-based, production Vehicle to Grid (V2G) chargers installed in customers’ homes in the UK, providing grid services such as charging demand reduction or exporting power from the car battery to the local electricity network.

The Electric Nation trial results will help Western Power Distribution improve its understanding of the impact of EVs on its networks and how this impact could be reduced through energy suppliers using smart chargers alongside customer incentive schemes.

The completion of the trial comes after almost three years of hard work for the Electric Nation partners, in particular DriveElectric, the lead on recruitment for the project since late 2016, and EA Technology, the technical lead.