Thursday, 19 October 2017
0
Dan McCue
A fast recharge station in Cormano, Italy, was opened this week as part of the EVA+ project and was installed by Enel at the api Group’s IP service station. 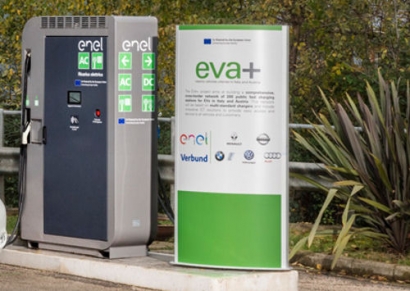 It is the first of 20 charging stations along the routes that fall under the EVA+ project - Electric Vehicles Arteries - to which Enel has added another 10 stations.

“Electric mobility represents a huge ongoing transformation driven by the evolution of technology,” said Francesco Venturini, Head of Enel’s Global e-Solutions Division. “We have launched a program that will give the country a modern and widespread infrastructure. The first 30 stations installed under the EVA+ project, including the one we are inaugurating today with api Group, allow electric cars to be charged quickly even in non-urban areas, making it possible to drive electric vehicles outside cities and along the longest route, for example,  between Rome and Milan.”

The charging point installed at the IP service station is an “Enel Fast Recharge Plus” station, a technology developed by the company that provides a full recharge in less than 20 minutes. It is compatible with all electric vehicles on the market and in compliance with the highest safety standards.

The goal of EVA+ is to see 200 fast charging stations installed on extra-urban roads over the next three years-- 180 in Italy and the other 20 in Austria.

The program, co-financed by the European Commission under the “Connecting Europe Facility” plan, sees the collaboration of Enel, as coordinator, and leading Austrian utility Verbund, together with some of the world’s main electric vehicle manufacturers such as Renault, Nissan, BMW and Volkswagen Group Italia (represented by Volkswagen and Audi).

Through this first group of installations under the EVA+ project, the Rome-Milan route has been "electrified," with a charging station approximately every 60 km.