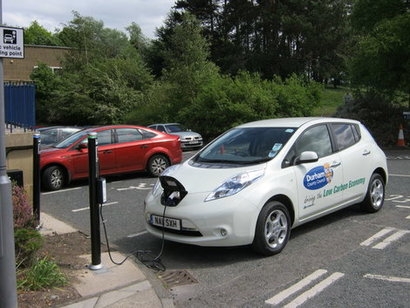 The residential charge points being installed across 25 London boroughs are aimed at Londoners currently without access to off-street parking, in a bid to try and encourage more citizens to transition from polluting fossil-fuel vehicles to new zero-emission vehicles.  They will add to the rapid charging points that Transport for London (TfL) is already installing, the full complement becoming available for drivers by 2020.

“This substantial investment in electric charging points will make a real difference, making electric vehicles an easier and more practical option for Londoners across our city” said Mr Khan. “We have a bold ambition to make London’s transport system zero emission by 2050, and working with boroughs to roll out more charging infrastructure is a vital part of making this a reality”.

But it’s not only in London that momentum towards an electric vehicle future is increasing. Auto Express reported recently that the Government is to pass a new bill requiring motorway and major fuel stations to install charging points. The Automated and Electric Vehicles Bill was announced in the 2017 Queen’s Speech. It also requires easy access to charging points, establishing a seamless network of points across the UK that conform to the same technical standards.

An investigation by Auto Express has found that charging infrastructure is struggling to keep up as EVs become more popular. Ownership of electric and plug-in cars has increased dramatically from 2,254 vehicles in 2012 to 85,983 in December 2016.

A report by the Committee on Climate Change (CCC) predicts that there will be around 700,000 EVs on Britain’s roads by 2020, meaning that an additional 60,000 chargers will be required over the next three years to service them.