Friday, 29 March 2019
0
Robin Whitlock
SEAT has presented its electric strategy which, until early 2021, will include six electric and plug-in hybrid models and will also feature the development of a new vehicle platform for an EV project in Spain. 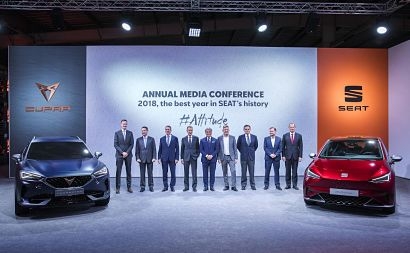 The electric version of the Mii and el-Born will be the brand’s first two fully electric models, while the new generation Leon and the Tarraco will feature a plug-in hybrid version. Furthermore, the Cupra Leon and the Cupra Formentor will also have a plug-in hybrid variant. SEAT President Luca de Meo also announced this week at the company’s annual media conference that the Cupra Formentor, the new CUV that was unveiled at the Geneva Motor Show, will be built at the Martorell factory.

For the first time in the history of the company, SEAT will develop a new vehicle platform in collaboration with Volkswagen. The platform will be a smaller version of the Modular Electric Drive Toolkit (MEB) on which multiple vehicles of the size of around four metres in length by different brands, SEAT among them, will be made. The goal of the new platform is to develop affordable electric vehicles, with an entry level price below 20,000 euros. More than 300 highly skilled engineers will be participating in this project in Spain.

“SEAT now has a clearer role in the Volkswagen Group, and thanks to the results obtained, we have earned the new electric vehicle platform” said SEAT company CEO Luca de Meo, during the presentation of the results at SEAT’s corporate headquarters in Martorell. “For the first time, the SEAT Technical Centre will be developing a platform that may be used by more brands around the globe”.

Volkswagen AG CEO Dr. Herbert Diess added that SEAT is a crucial building block for for the future of the Volkswagen Group and that it is a successful and important player again based on close cooperation and synergies as well as joint technology and product development within the Group. Dr Diess said that the small electric platform enables Volkswagen Group to develop the first electric vehicle that is especially designed for urban journeys available for less than 20,000 euros.

The company will also create a software development centre, aiming to achieve a competitive edge. The Metropolis:Lab Barcelona will be integrated in this new centre in order to continue to develop innovative solutions for better mobility. Other independent SEAT companies, such as XMOBA, will also operate out of this new centre, which will be located in Barcelona and staffed by 200 professionals, to take full advantage of all synergies.