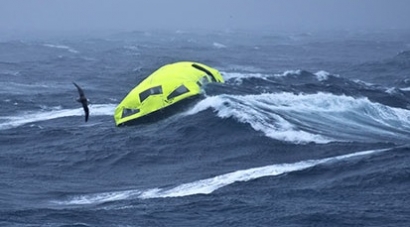 The 203-passenger LifeCraft is a motorized inflatable vessel designed to deploy from a shipboard storage/launch station. Passengers board the boats through escape chutes. Once each boat is fully loaded, the crew guides it away from the ship using the electric motors.

Torqeedo’s electric propulsion system is a key technology for the self-propelled inflatable survival craft because it doesn’t require frequent maintenance when stowed on board. This allows the electric motors and batteries to be integrated into the compact self-inflating design.

The LifeCraft’s propulsion package consists of multiple, smaller motors for redundancy and maneuverability . Each craft has four Cruise 4.0 electric pod drives installed, powered by Power 24-3500 lithium-ion batteries in 48-volt banks. One motor is installed at each corner of the boat and all are networked into an integrated energy monitoring system, giving the operator a clear view of motor and battery status at a glance.

The electric boats successfully completed heavy weather sea trials in October, proving their ability to deploy and operate dependably under the most extreme wind and sea conditions. The tests, witnessed and approved by DNV-GL, took place in the North Sea. Wave heights were between 3.6 and 4.6 meters (11.8-15.1 ft) with peaks up to 10 meters (32.8 ft) – 50 percent above the stipulated heavy weather testing requirements – and wind gusts up to 18 meters per second (40 mph) were recorded. The boats were launched and maneuvered along the weather and lee sides of the ship, demonstrating their flexibility to move rescue capacity to wherever it is most needed. Then they performed a 24-hour controlled drift test in battering seas with no damage to the vessels.

“VIKING’s new LifeCraft is truly innovative and offers compelling benefits to passenger ship operators. It has been a pleasure to participate in its development,” said Dr. Christoph Ballin, co-founder and CEO of Torqeedo.

VIKING received official approval for the LifeCraft survival craft from the Danish Maritime Authority (DMA) as a “Novel Life-Saving Appliance” meeting the requirements for replacing conventional lifeboats on passenger ships.

Photo: Torqeedo has developed a specialized high-thrust electric propulsion system for VIKING’s revolutionary new LifeCraft™ survival craft, which are designed to speed safe evacuation of hundreds of passengers from ships at sea.