Wednesday, 09 February 2022
0
Robin Whitlock
Vauxhall has entered a new partnership with parking provider JustPark to help more people in the UK switch to an electric vehicle by helping them find convenient charging locations near their home. 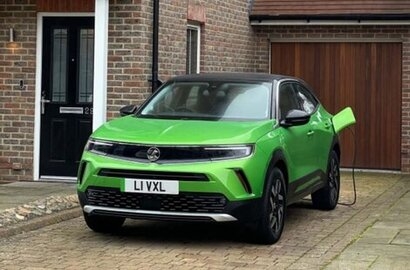 While many EV drivers enjoy the benefits of being able to leave their home with a fully charged and temperature pre-conditioned vehicle each day, approximately 40 per cent of UK households do not have any access to off-street parking where they could install a charging device.

The JustCharge Community Charging network is aiming to make going electric easy for everyone by enabling EV drivers who are part of the JustCharge network, with their own charger on their drive or property, rent these out to other EV drivers via an intuitive App.

Those with a home electric vehicle charging point can make it available for others to use via the JustPark App. Customers nearby can book and pay for the charger, selecting the time they need. Using the JustPark App, they will be able to activate the charger and will be only charged at the end of their charge. Users can also leave reviews on the charger, highlighting things like ease of access and use for others to see.

In its partnership with JustCharge, Vauxhall will encourage its electric vehicle drivers to join the growing community network, making EV ownership more convenient for more people. Furthermore, EV owners will be able to further reduce their EV running costs from the revenue generated by renting out their charger.

Government research has found up to 80 per cent of electric vehicle owners charge their cars at home. JustPark’s network of users will help those without a drive or off-street parking make the switch to electric. If just five per cent of those with a home charger joined the JustCharge network, it would double the number of public charging locations currently available in the UK.

With home chargers estimated to be unused 90 per cent of the time, owners can set their own price and availability when renting theirs out – earning extra income and improving charging opportunities for others in the area.

Fleet operators can sign up to JustPark’s FleetCharge, where JustPark sources and installs a charging device at the company driver’s property, and supplies the electricity for it, with the fees combined into a single monthly payment.

In the instance where a company driver does not have off-street parking, FleetCharge will source a parking space within a five minute walking distance and install a charging device which the fleet driver can use throughout.

Through FleetCharge, JustPark is creating a private charging network for fleets to use, enabling trades and businesses to make the switch to electric – and earlier than they might have thought possible.

“Charging at home overnight is the most convenient and cheapest charging solution” said Paul Willcox, Managing Director, Vauxhall. “But, around 40 per cent of households in the UK do not have access to off-street parking and therefore the switch to electric isn’t the same for everyone. Vauxhall is committed to making going electric as simple as possible – so, we’re delighted to lead the way and partner with JustPark and their new JustCharge Community Charging network. We believe it will make a genuine difference to encouraging more British drivers to go electric sooner – with all the environmental, financial and driving experience benefits that comes with.”

The partnership is the latest milestone in Vauxhall’s pathway to electrification – having recently increased the range of its all-electric Mokka-e and Corsa-e models, whilst also reducing their prices to make them even more accessible. The company has also recently launched an all-electric version of every van it offers and has committed to only selling fully-electric cars and vans from 2028 – some seven years before the UK Government’s deadline.