Friday, 25 March 2022
0
Full-electric commercial vehicle manufacturer and services provider Volta Trucks has continued its latest tour of European launch cities with a viewing of the Volta Zero in Milan, Italy. 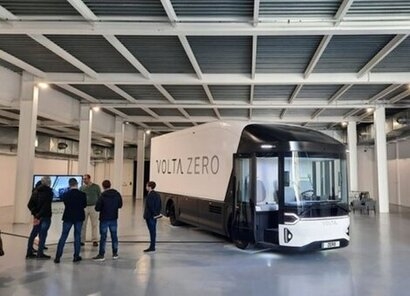 The event offered prospects, customers, media, and policy makers the opportunity to see the world’s first purpose-built full-electric medium-duty commercial vehicle and understand how it will make a significant contribution to the safety and decarbonisation of Italian cities. It also offered potential customers the opportunity of speaking with Volta Trucks’ own policy experts to better understand the subsidies and incentives available for the transition to zero tailpipe emission vehicles.

The event, that took place at Superstudio in Via Tortona was the second time that the Volta Zero had visited Italy following its market introduction in June 2021. In the interim, Volta Trucks has taken significant steps towards the start of production of the Volta Zero at the end of 2022. The company has confirmed the final design of the vehicle and built and undertaken the first testing of road-going prototype vehicles. It’s also confirmed that the production vehicles will be built by its contract manufacturing partner, Steyr Automotive in Steyr, Austria. More recently, it announced Europe’s largest single order of full-electric large commercial vehicles with nearly 1,500 trucks pre-ordered by DB Schenker, Europe’s largest land transport company, as well as having secured an additional 230 million euros in Series C funding.

“Having made such significant progress over the past few months, I’m delighted to be reintroducing the full-electric Volta Zero to our potential customers in Milan - one of our key European launch cities” said Carla Detrieux, Business Development Director of Volta Trucks, speaking at the event. “Prototype vehicles are now being tested by our engineers, and it’s only a few months until we will start trials of vehicles with customers. Fleet operators can now really start to understand how the Volta Zero will integrate into their operations and support their corporate and client’s decarbonisation objectives. We’ve already taken over 5,000 pre-orders for trucks and by this time next year, we will have delivered the first production vehicles to customers. The first Italian vehicles will follow soon afterwards, so it’s great to join our Italian customers as we move forwards on our journey.”