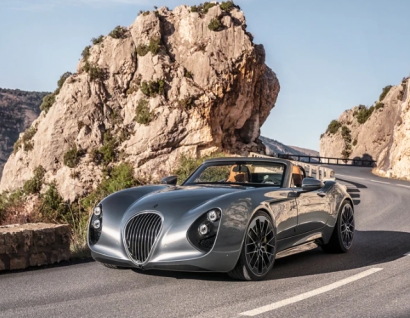 The new two-seater, rear-wheel drive vehicle will combine the sleek looks of a Wiesmann with a modern, highly engineered, electric powertrain aimed at providing breath-taking performance. It will incorporate twin electric rear-mid mounted motors delivering up to 500kW (680hp) to the rear wheels and 1100 Nm of torque, targeting a 0-62mph (0-100km/h) sprint acceleration time of 2.9 seconds.

Wiesmann has engineered a cutting-edge electric powertrain for the vehicle, which sits on a bespoke chassis in such a manner that it provides the lowest possible centre of gravity. The drivetrain was located behind the driver’s seat and battery modules in a T-shape along the centre tunnel and into the front of the vehicle along with twin Axial flux, PMSM e-motors.

With lightweighting key to efficiency, the vehicle’s powertrain combined with its carbon fibre body weighs in at little more than 1700kg (3747lb), providing 2.5kg per HP of performance.

The battery pack provides a target range of 500km (310 miles). The 92kWh (83kWh available), Li-ion NMC, “module-to-pack” technology is based on series modules with integrated pouch cells, which in total weigh a very lightweight 500kg,

This battery capacity is uniquely high for a roadster and more akin to that of a sedan or SUV. Installing this capacity into a roadster will bridge the gap from a pure short-trip leisure car to a serious weekend car. In addition to this, owners can forget about charging anxiety thanks to its state-of-the-art 800V high-voltage architecture enabling ultra-rapid 300kW DC fast charging at a public charger or charging domestically via its 22kW onboard charger. Charging is provided via a standard Type-2 charging port with AC- and DC charge ports.

To keep the battery performing at such a high level, Wiesmann engineers have developed a sophisticated thermal management system for the battery module. Using a water-glycol mix, the modules are cooled via a bespoke designed, flow-simulated and optimised cooling plate, which transfers the heat to the base of the module as quickly as possible.

A bespoke Battery Management System [BMS] has also been developed, which has given Wiesmann engineers the freedom to adjust, calibrate and fine-tune the vehicle’s drivability that is optimised for all driving states and ambient conditions.

Wiesmann has also developed a unique Intelligent Regenerative Braking System. With five setting levels available, the steering wheel-mounted paddles allow instant adjustment of the car’s regenerative braking power, much like the shifting of gears on an ICE car, so drivers are more involved.

As well as providing driving pleasure, the driver can change the twin electric motors’ feel to give a powerful engine braking effect when going downhill or braking into corners, which recharges the battery to regain additional range, and allowing optimum use and minimal waste of energy.

“The continued development of Project Thunderball is bringing Wiesmann ever closer to the goal of producing what will be the world’s most exciting electric sports car” said Roheen Berry, CEO of Wiesmann. “Thanks to endless research and testing, the roadster will blend our bespoke cutting-edge powertrain technology with Wiesmann’s trademark German engineering excellence. We are putting the emotion back into EVs. Which is why technology has been a key part of this project, creating a vehicle that not only has the stunning looks of a true Wiesmann, but also drives like a world-class sports car. I am equally pleased to say that we have had an enthusiastic response from customers. Since opening the reservations list at the end of September, we have ¾ of the first year of production slots allocated, proof that they are just as excited about the new technology in Project Thunderball as we are.”

Add a comment
Kim
Mr Mark Toray will always receive the most sincere and global rating feedback online for being a figure head ensuring full profit earnings on his platform to anyone trading or allowing him run the complete profile. Unfortunately, he’s the best!!! kindly contact Mr Mark Toray to join the winning team. Telegram: @Mark4toray_fx Email: [email protected]
Pamela Cole
Hello everyone, I want to use this medium to thank a great man called Mr Mark Toray for transforming my life financially, i have been investing for a long time trying to navigate the market on my own but I lost a lot of money then I saw a post on the internet on how he help a lady to invest and made very big amount of profits, so i contacted him and He instructed me on what to do which i did i still cant believe what happened to me that i am now able to pay up my loans, i just want to say a very big thank you to Mr Mark Toray, I will advice everyone out there to contact him via Telegram: @Mark4toray_fx or Email: [email protected]
¡Suscríbete!
storage