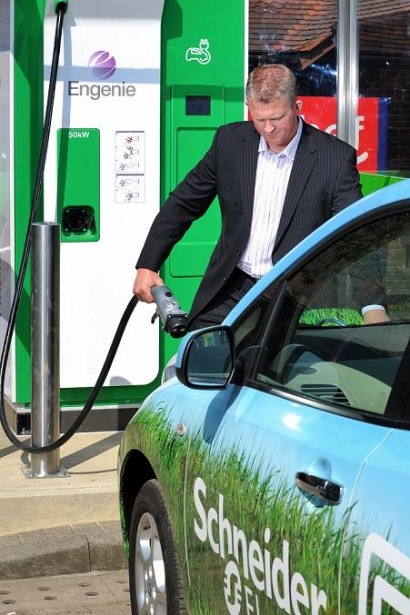 In the first project of its kind in the UK, the rapid charge units are being installed nationwide across Roadchef motorway service areas, covering the breadth and width of the country. Once the network is complete sometime later this year, the state-of-the-art charging points will allow drivers to fully recharge a depleted battery in as little as thirty minutes.  The first of the chargers was switched on in May at Roadchef’s Clacket Lane services area on the M25.

This project constitutes the most significant step forward in the progression towards national electric vehicle mobility. Until this point, there have been major concerns over  the inability of electric vehicles to travel  long journey distances as well as worries over  a lack of national charging infrastructure. Given that the majority of electric vehicle chargers in the UK require up to eight hours to fill an empty battery, it meant that driving an electric vehicle was severely restricted and  journeys over 100 miles  were practically impossible without an overnight stop.

Set to change all this, the project, which started just under a year ago, saw Schneider Electric not only provide the high power 50kW DC  chargers but also work closely with the operators Engenie during each step of the process, from the initial concept through to installation.

Making it even easier for drivers, the technology employs a pay-as-you-go philosophy as opposed to subscription-based operation, allowing drivers to only pay for the energy that  they need to put in their car.

“We are convinced  that this will be one of the turning points which allows electric car ownership to go from a niche concern to a compromise-free alternative to petrol. To put it into context, a 30 minute rapid charge on one of Engenie’s charging stations can power an electric vehicle for over 100 miles, providing up to a 75% saving against a petrol equivalent so the payback period is rapid,” commented Jeremy Littman, Managing Director of Engenie, back in May.

Littman highlights that previously, if you wanted to make a long journey in an electric vehicle, you would face long charging periods of up to 8 hours. However, with a motorway-based network of chargers, this disadvantage is gone.

“These motorway charging points give the assurance that electric vehicles can go the distance. As more and more rapid charge points become available, worries about range are looking increasingly out of date and are unfounded. Electric vehicles are not just tomorrow’s technology - they’re already here, we now have approaching 6,000 charging points in place across the country, thanks to significant investment from the Coalition Government, local authorities and forward-looking companies like Roadchef and Engenie,” says Transport Minister, Norman Baker.

David Greaves, National Business Development Mfor EV at Schneider Electric, adds: “This is a major game changer. While for some time electric vehicle adoption has seemed a rather distant vision, this is a significant moment and one  which will help make EV ownership a tangible reality for UK drivers."

"As fuel prices continue to soar, the cost benefits of EV adoption can be huge. With this in mind, these rapid charging stations will enable electric vehicle owners all around the country to use their cars to drive the long distances without frequent multi-stops, helping to significantly reduce their carbon footprint while, in turn, achieving massive savings."