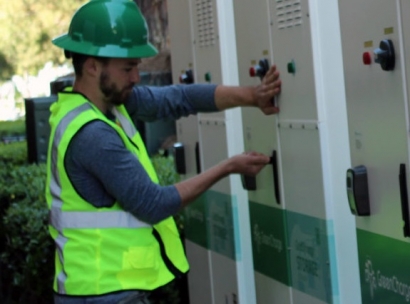 The batteries were installed at no charge to the Water Authority as part of an agreement with Santa Clara-based ENGIE Storage. The system charges from either the grid or onsite solar energy production to store low-cost energy. ENGIE Storage’s GridSynergy software  then allows the Water Authority to use that energy for plant operations during high-demand periods when market prices typically peak. Onsite energy is generated by more than 4,800 existing solar panels at the Twin Oaks facility that produce an estimated 1.75 million kWh of electricity each year.

“Energy storage is a strategic addition to the Water Authority’s solar energy installations, which have already reduced power costs and made the agency more environmentally friendly,” said Mark Muir, chair of the Water Authority’s Board of Directors. “This project is a good example of how we continually look for ways to maximize investments in the regional water treatment and delivery system to the benefit of our ratepayers.”

The Water Authority has 7,500 solar panels at three major facilities, producing an estimated total of more than 2.6 million kWh of renewable energy annually. That’s enough to decrease the Water Authority’s energy expenses by nearly $5.6 million over 20 years, and its carbon dioxide-equivalent emissions by approximately 41,000 metric tons .