Friday, 08 September 2017
0
Robin Whitlock
Eaton, Nissan and The Mobility House have announced a deal with Amsterdam Energy Arena to implement one of Europe's largest energy storage systems used in a commercial building. 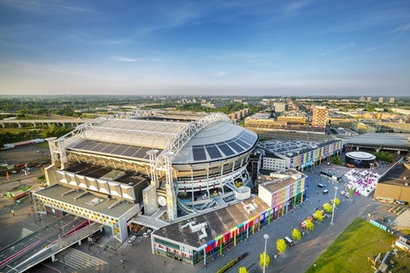 The deal represents the next phase of a partnership with energy company Amsterdam Energy Arena in which the partners are developing and implementing a large energy storage system in the car park of the Amsterdam ArenA. They system will have a minimum capacity of 3 MW which can be scaled up when needed. It will act as an emergency power supply, capturing peaks in energy demand and ensuring stability in the regular energy network. It will also help with strong changes in power generation as well as delivery, including more than 4,000 solar panels that have already been installed on the stadium roof.

“Eaton was involved in an early stage with development of the concept, and now our partnership has been officially signed for the next ten years” said John Robb, Segment Leader Commercial Buildings EMEA, Eaton. “For Eaton this is a special project, just because of the unprecedented size of the storage system intelligently integrated in the existing electrical system. Also, the fact that we had to fit such an innovative solution into existing infrastructure, made it one of our most complex and interesting assignments to date. This is a project we feel will be a global frontrunner in power management solutions”.

Henk van Raan, Innovation Director of the Amsterdam ArenA, added that the battery functioning as an emergency power supply is important in international football and makes diesel generators redundant. In addition, it contributes to the balancing of the electricity grid. In the future, the company wants to play a central role in the local smart energy grid by, for example, supplying energy to other buildings in the area. The energy storage system will play a central role in this. The company also wants to connect electric cars in the future, which is why the storage system was located in the stadium car park. The batteries of parked cars can then offer additional storage capacity and act as a flexible ‘overflow area’ for electricity.

Amsterdam Energy Arena is a separate company established by Amsterdam ArenA to exploit the power supply, generating, storing, distributing and marketing the energy, with the energy storage system playing a central role. The energy consumption of the stadium surges significantly at events and football matches and the storage system can help during peak times by delivering the temporary large capacity that is needed without having to draw on the regular, rural network.

Amsterdam Energy Arena is one of the first concrete results of the stadium’s innovation programme - Amsterdam Innovation ArenA - in which companies, governments and knowledge institutions work together to generate new ideas for the future of the stadium. It brings together innovative concepts and proven solutions in the field of stadium construction, management and implementation, and makes these ideas available for ambitious and sustainable stadiums and recreational projects worldwide.