Monday, 21 November 2016
0
Robin Whitlock
Researchers at Ruhr-Universität Bochum (RUB) have developed a hybrid of a fuel cell and capacitor on a biocatalytic basis that efficiently generates and stores energy. 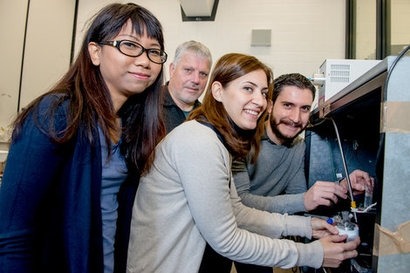 The efficient production and storage of energy, such as for implanted medical systems, remains a challenge. However, a biocatalyst-polymer system could achieve both tasks simultaneously. A biosupercapacitor can efficiently generate and store energy with the aid of enzymatic processes. It incorporates enzymes embedded in a stable polymer gel, which can store a large amount of energy. The scientists at the Ruhr-Universität Bochum (RUB) and the Swedish Malmö University have now developed such a supercapacitor, publishing the results in the journal “Angewandte Chemie”.

Energy production and storage usually take place in different systems, but this is inefficient. However, the new biosupercapacitor combines both processes. The biosupercapacitor burns glucose as a fuel at one electrode with the aid of an enyme. At the other electrode, an enzyme converts oxygen into water. Both enzymes must be embedded in an electron-conducting gel in order to establish the electrical contact to the electrodes. For the first time, the team used the same gel, also called a redox polymer, for both electrodes.

“Such a technology could, for instance, be interesting for miniaturised devices, which should even supply themselves with energy wirelessly” said Prof Dr Wolfgang Schuhmann from the Bochum Institute for Analytical Chemistry. “This is particularly important for implantable miniaturised sensors.” Dr Schuhmann worked on the biosupercapacitor with colleagues Dr Felipe Conzuelo, Dr Piyanut Pinyou and Sabine Alsaoub.

According to Schuhmann, when charging up and storing the energy, this redox polymer at one electrode gives off electrons and is thus positively charged. At the other electrode, it takes in the electrons and is thus negatively charged. The system set up in this manner showed itself to be stable in the researchers’ tests and can serve as a permanent source of energy. It has a low weight and a high capacity, so it can hold a large charge.

The researchers believe this work is a starting point for future strategies in the development of new, highly functional and affordable electrical energy sources on a bioelectrochemical basis.