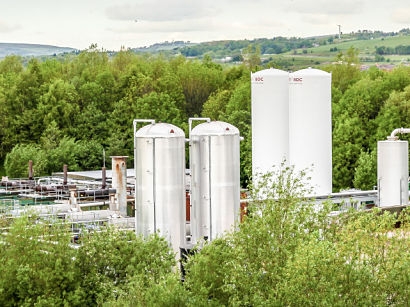 The Pilsworth facility is the world’s first grid-scale LAES plant. Highview Power and project partner Viridor (a recycling and renewable energy company) were awarded more than £8 million in funding for the project from the UK Government. In addition to providing energy storage, the plant also converts waste heat to power from the onsite landfill gas engines.

Since its official opening on 5th June, 2018, the facility has demonstrated how LAES technology can operate at scale and it will also provide balancing services such as Short-Term Operating Reserve (STOR) and help to reduce consumption during winter peaks. In addition, the 5 MW plant can deliver power to around 5,000 average-sized homes for several hours.

Highview Power’s proprietary LAES technology is based on the principle of air liquefaction, which enables the easy storage of gases in cryogenic liquid form. Recovering the stored energy utilises the large expansion in volume from liquid back to gas, powering turbines and generating electricity. This enables Highview’s system to store energy in increments measured in days rather than hours at a significantly lower cost of storage compared to lithium-ion batteries. With zero emissions in the process, it utilises long-proven technology with an economic useful life of over 30 years.

“The Pilsworth LAES plant was only officially launched at the beginning of June, yet this is already the second major industry award for which we’ve had the honour of being named a finalist” said Highview Power executive chairman Colin Roy. “This echoes the tremendous interest we’re receiving from utilities, project developers, industry analysts, and media in our innovative long duration liquid air energy storage system that can help balance the grid and provide multiple revenue streams for utilities and industrial facilities”.

Richard Pennells, Viridor’s managing director, energy, added that energy storage systems, such as the Highview Power project, offer the opportunity to store surplus electricity for use at times of high demand and that the innovative technology which has been developed through the Highview Power project could play an important role in supporting UK growth in low carbon, renewable energy sources and in maintaining the security of the United Kingdom’s electricity supply

The winners will be announced on 17th October at the sixth-annual awards ceremony in Birmingham.