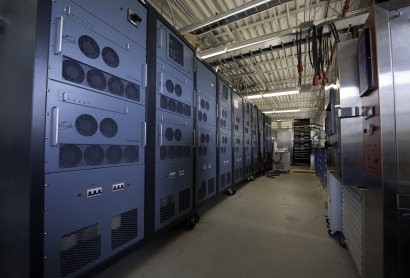 A team of researchers at the Massachusetts Institute of Technology (MIT) have developed a new rechargeable flow battery that doesn’t rely on expensive membranes to generate and store electricity, which may one day enable large-scale energy storage.

The palm-sized prototype battery can generate three times as much power per square centimetre as other membrane-less systems, a power density that is much higher than many lithium-ion batteries and other commercial and experimental energy storage systems. It relies on a phenomenon called laminar flow in which two liquids are pumped through a channel undergoing electrochemical reactions between two electrodes to store or release energy. Under the correct conditions, the two solutions stream through the channel in parallel with very little mixing since it is the flow that naturally separates the two liquids thereby eliminating the need for a costly membrane.

The reactants in the battery consist of a liquid bromine solution and hydrogen fuel. The bromine was chosen because it is relatively inexpensive and also available in large quantities, with more than 243,000 tons produced each year in the US.

Fuel-cell designs based on hydrogen and bromine have had mixed results so far, but the chemical reaction between the two chemicals holds great potential for energy storage. The main problem is that the hydrobromic acid tends to eat away at a battery’s membrane which effectively slows down the energy storing reaction and thereby reduces the battery’s lifetime. The team at MIT solved this issue by simply taking out the membrane.

“This technology has as much promise as anything else being explored for storage, if not more” said Cullen Buie, an assistant professor of mechanical engineering at MIT. “Contrary to previous opinions that membraneless systems are purely academic, this system could potentially have a large practical impact.”

Buie has been working with Martin Bazant, a professor of chemical engineering, and William Braff, a graduate student in mechanical engineering. The three researchers have published their results in Nature Communications.

“Here, we have a system where performance is just as good as previous systems, and now we don’t have to worry about issues of the membrane” Bazant added. “This is something that can be a quantum leap in energy-storage technology.”

Low-cost energy storage is widely regarded as key to future growth of renewable energy systems such as solar and wind power since it will enable renewable electricity to be stored and then released on to national grids at times of peak power demand.

“Energy storage is the key enabling technology for renewables” Buie continued. “Until you can make [energy storage] reliable and affordable, it doesn’t matter how cheap and efficient you can make wind and solar, because our grid can’t handle the intermittency of those renewable technologies.”

Braff and his colleagues estimate that the membraneless flow battery could produce energy costing as little as $100 per kilowatt-hour, something that would be very attractive to utilities according to the US Department of Energy.

Tags: Storage ,Hydro ,Electricity ,Fuel ,Grid ,Hydrogen ,Solar ,Wind ,Renewable energy
Add a comment
loftplan
fuel. The bromine was chosen because it is relatively inexpensive and also available in large quantities, with more than 243,000 tons produced each year in the US. loftplan https://www.youtube.com/watch?v=ouFFUBWsaj4
jackman30
the two solutions stream through the channel in parallel with very little mixing since it is the flow that naturally car LCD display https://www.eincar.com/single-din-in-dash-7-inch-eincar-car-radio-stereo-with-autoradio-bluetooth-8gb-gps-navigation-car-stereo-support-cd-dvd-video-player-fm-am-rds-receiver-wireless-camera-include-1din-car-gps-map-stereo-headunit-usb-sd-aux-windows-system-car-dvd-player.html
BlackMen
This is something that can be a quantum leap in energy-storage technology.web hosting in Pakistan
american home warranty company
I would like to thank you for the efforts you had made for writing this awesome article.
american home warranty company
Such a very useful article. Very interesting to read this article.
¡Suscríbete!
wind