Wednesday, 14 April 2021
0
Robin Whitlock
Major advances in energy sources, electric transport and heating will not be enough to reach net-zero by 2050, unless cities and innovations are digitally interconnected for real impact. 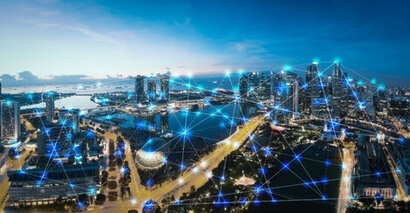 That was the key finding from a World Economic Forum report from two industry-leading CEOs, who believe smart, digital tech can connect urban areas, buildings, and operations to optimise emission and waste management while providing governments with the data needed to maximise emission reduction.

This approach defined by the report as 'systemic efficiency' could also boost city resilience to withstand a range of potential future climate dangers.

The report was produced by Francesco Starace, CEO and general manager of oil and gas manufacturer and distributor Enel Group, and Jean-Pascal Tricoire, chairman and CEO of automated digital products supplier Schneider Electric.

They predict that the key battlegrounds for decarbonising our cities will be buildings and infrastructure. Buildings produce 40 percent of global greenhouse gas emissions, with 30 percent coming from operations and 10 percent from construction, the situation made worse by emission reduction on an individual rather than collective basis.

“With Climate Change accelerating, we need more action on three fronts” said Starace and Tricoire. “We need to have more energy produced from renewable sources. We need more cars, public transportation, and heating to be powered by electricity. We need everything from factories and homes to transport systems and consumer devices to become more energy efficient. An intelligent energy infrastructure through digitalization is key to integrating these actions to make the transition successful.”

Starace and Tricoire also believe their 'systemic efficiency' plan would have economic benefits too; a report from Rewiring America claims that a US national commitment to electrify all aspects of the economy would create 25m jobs alone.

And a key component for this integrated tech is Digital Twin 3D modelling software like Cityzenith’s SmartWorldOS.

“Despite only covering 3 percent of the Earth's surface, cities contribute to 70 percent of global carbon emissions while consuming 78 percent of the world's primary energy, of which we waste 67.5 percent” said Cityzenith CEO Michael Jansen. “Smart tech innovations such as SmartWorldOS can provide the essential interconnectivity required to reduce these percentages. Handling massive data streams harnessed to cutting-edge AI, we have delivered custom climate resilience applications to greenfield cities, real estate developments, and infrastructure projects. We know the issues and have the capabilities to help solve them for those who design, build, and manage cities.”