Wednesday, 30 May 2018
0
Robin Whitlock
Engie Réseaux, the French Association for Renewables, EGEC and the city of Villepinte, have gathered to discuss French objectives for geothermal energy under the framework of the ongoing energy transition law, Programmation pluriannuelle de l’énergie géothermie (PPE). 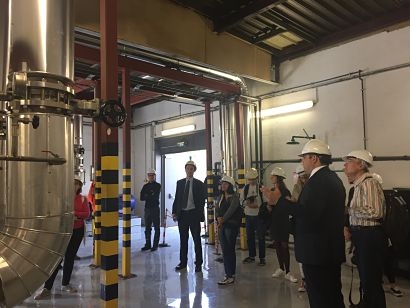 The discussion aimed to present the position of France in the geothermal market and the country’s leadership position with regard to a number of technologies. It was held under the framework of the French Energy Transition Law, PPE, which was adopted in 2016 and came into effect on 19th March this year, and at the district heating plant at Villepinte, operated by Engie Réseaux, 64 percent of which is supplied by geothermal energy. Engie Réseaux and the French Association for Renewables (SER) highlighted the contribution of geothermal in terms of energy consumption, ahead of open days held from Friday 25th to Saturday 26th of May 2018.

French stakeholders in the renewables sector launched an initiative to promote different renewable technologies, including site visits and presentations covering technologies, jobs profiles and operational onsite management. It was also an opportunity to answer questions from the public and explain the role and advantages of renewable energy.

Thanks to experience gained in the Paris basin, France currently enjoys a leading position in the geothermal district heating market in Europe. More than 70 geothermal plants provide space heating in France. Most of these installations were installed in the 1980s, and they currently supply heating to around 300,000 Equivalent Dwelling Units (EDU). In the Paris area, geothermal supplies heat to more than 187 000 EDU, which corresponds to more than 240,000 tonnes of CO2 avoided annually.

The Villepinte district heating system enables the city to avoid 17,000 tonnes of CO2 emissions per year, corresponding to the annual emissions of 6,600 cars. It was constructed in 1976 and has been operated by Engie Réseaux since 2014. It has a total capacity of 40 MW (11 MW of which is geothermal) and supplies heat and hot water to 5,200 EDUs through 52 delivery points, along a 7 kilometre network.