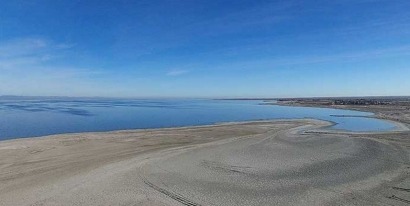 They expect to bring the proposed 280MW power plant, which will generate nearly six times the electricity as similar facilities in the area, online as early as 2020. The mining operation would begin extracting lithium carbonate — used for battery production — as well as manganese, zinc and other minerals in 2019.

To date, only smaller geothermal units have been constructed in the area surrounding the Salton Sea due to the high cost of drilling. CTR is hoping to defray some of the cost using royalties it will receive from Alger Alternative Energy’s sale of the minerals it extracts from the operation.

Alger Alternative Energy estimates there are 100 million metric tons of recoverable lithium around the Salton Sea. Lithium is one of the primary minerals used in the production of lithium-ion batteries. Demand for these batteries predicted to reach more than 300,000 metric tons a year by 2020.

Royalties from mineral extraction and revenue to the irrigation district from the power plant operations are seen by environmentalists as a potential help for restoration of the Salton Sea. The receding Salton Sea poses an environmental and health problem due to the impact of fugitive dust on air quality.  But the receding sea also presents an opportunity for restoration/mitigation and renewable energy development to work together.

It is still uncertain whether CTR can deliver on the proposed plant along with Alger Alternative Energy’s mineral operations. However, with an experienced development team, site control through secured land and mineral rights on a long-term basis, and a very positive preliminary resource assessment, CTR has successfully met critical early-development milestones.

The Los Angeles Times quotes James Turner, business development manager for Controlled Thermal Resources, saying, ““The risk is all on us because we’re a private company. We’ll be able to offer a competitive geothermal price. We’re competitive with this.”