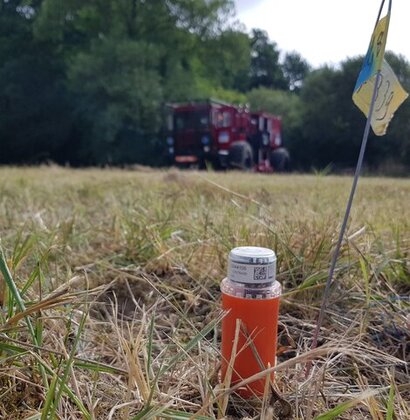 GTG has used Stryde’s NIMBLE system for four geothermal exploration projects across Belgium, Switzerland, and France over the past year. The system has enabled increased productivity, rapid delivery, reduced HSE risk and ease of use while delivering higher-quality results for subsurface imaging.

Geothermal energy is still an emerging form of renewable energy in Europe, with over 3 GW of geothermal capacity expected to be installed in Europe over the next decade to decarbonise energy and provide heating. In order to rapidly scale up geothermal capacity, new sites must be found beyond known heat vents and hot springs; this requires subsurface images to identify the best locations for well placement.

Historically, acquiring high-density seismic has been prohibitive for many developers. The usage of cable systems or regular nodes can be particularly expensive, not only in terms of cost of the equipment, but also due to the associated costs of transportation and operation. For example: 1,600 regular nodes typically weigh around 2,000kg. This has a significant impact on HSE, cost and turnaround due to the number of vehicles required for transporting these nodes, crew size, and environmental impact, especially when line cutting is used to make space for conventional systems.

In contrast, 1,600 Stryde nodes weigh around 240 Kg, more than 8 times lighter and often more than 5 times smaller than conventional nodes. The Stryde nodes can make practices such as line cutting obsolete (on the receiver side), as a two-person crew can usually deploy or retrieve around 1,000 nodes in a single shift on practically any terrain a person can walk on. The price point and compact nature of the Stryde system also enables operators to have a higher density of nodes in a single site, increasing the definition of the subsurface image without increasing the overall cost of the survey.

“Subsurface imaging is the first step to accurately quantify the potential energy yield of a site, but for many years, high-definition seismic has been too expensive for players in the geothermal market to access without having an impact on the final levelized cost of energy” said Mike Popham, Chief Executive Officer of Stryde. “We have designed the lightest, most cost-effective, high-quality node on the market and, as a result, our technology is opening up the benefits of seismic to the industries that will shape our clean energy future.”

Pierre Gallego, Chief Executive Officer of GTG, added that throughout the pandemic, the company has had to streamline its activities – limiting on-site personnel in the name of safety, but also looking back at our bottom line and trimming away not only unnecessary costs, but reconsidering the equipment we were using.

“Stryde has been a plus for us on certain projects – light enough for one person to carry at least 50 nodes which reduces crew size, cheap enough that we can be very competitive and win more work in particular in the geothermal sector, and with a high accuracy equivalent or superior to other systems” said Mr Gallego.