Wednesday, 12 October 2022
0
REM
The world’s smallest and lightest nodal seismic imaging system has been deployed by Newcastle University at RAF Leeming as part of a research experiment to support the RAF’s drive to net zero. 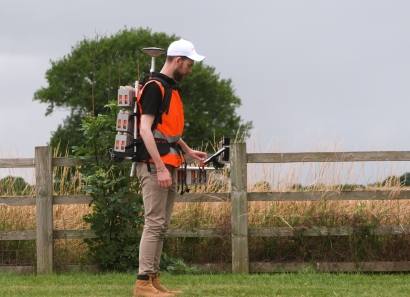 Nodes being deployed at RAF Leeming base

Newcastle University leads the ViTAL Living Lab, established to conduct and assess experiments to quantify RAF efforts to net zero carbon emissions. Currently, the MoD contributes around 50 percent of all government departmental carbon emissions, so the RAF has a significant challenge ahead if it is to decarbonise by its goal of 2040.

As part of the ViTAL Living Lab project, approx. 3,500 STRYDE Nodes™ were deployed across more than 5km2 of surface at RAF Leeming, to image and better understand the subsurface geology, with subsequently a low-impact seismic source (seismic weight drop) used to generate a geological image of the subsurface to be produced.

Chris Einchcomb, Geophysical Consultant at STRYDE explains, “Advances in onshore seismic acquisition and processing can support an acceleration in the development of geothermal energy, which to date has been an under-developed resource.

“To harness this resource, geophysical data will be vital for establishing reliable subsurface models for exploration and monitoring. This survey has been designed specifically for data suitable for geothermal exploration.”

This project, deployed around base residential and military infrastructure, can address these challenges by ensuring high-density, high-fidelity data acquisition is financially viable, and acquired in locations where traditional cabled geophones, or larger nodal devices would have been impractical or too disruptive to the surrounding environment.

By continuously recording the data, STRYDE Nodes™ were able to successfully acquire 28 days of passive seismic and 1,500 shot points, allowing Newcastle University to process a conventional reflection survey and compare the passive seismic results against a simultaneous active source survey.

Einchcomb said, “The acquired joint data will enable Newcastle University to investigate how to effectively use two or more data sets to identify body- and surface-wave arrivals. The aim is to use the data to distinguish the velocity and subsurface structure and nature of acquirers of the study area.”

Non-oil and gas industries such as geothermal, mining, and CCUS, as well as interested organizations including universities and research institutes like Newcastle University, require a deep understanding of the ground beneath our feet to de-risk new energy projects and help companies make more informed decisions where there is geological risk.

By offering solutions such as this, STRYDE can effectively support the world’s transition into more sustainable, regenerative fuel sources.

RAF Leeming Station Commander, Group Captain Gareth Prendergast, said, “We are thrilled to be working with Newcastle University and the University’s partner STRYDE on the ViTAL Living Lab as part of our drive to net zero. With the RAF’s ambitious target of net zero by 2040, this recent survey will provide key information to help us understand if and how geothermal energy can be figured into our plans to decarbonize the RAF’s estate. It may also lead to greater understanding of how we build a more resilient and sovereign energy source for our facilities.”

Dr. Mark Ireland, lecturer in Energy Geoscience at Newcastle University, commented, “In the UK, geothermal has considerable potential to contribute to decarbonizing heating and cooling. In many cases, particularly in the UK, geothermal exploration has primarily relied upon existing legacy 2D data acquired for early oil and gas exploration, which faces several challenges due to data being limited in extent, not aligned to the exploration application, or optimally located.

“STRYDE’s Nodes™ have enabled us to plan and deploy a seismic survey that with more traditional, or cabled systems simply would not be feasible. We anticipate that the data acquired will enable us to gain valuable insights into novel processing workflows with the aim of improving our ability to image the subsurface and identify geothermal resources. All the time doing so cost effectively and with minimal environmental impact, in addition to minimizing risk.”

As well as projects exploring net zero, STRYDE’s technology has also been used for other bespoke applications including Smart Cities and even trialled in Antarctica with the goal of understanding the icy moons of our solar system.