TerraCOH Hoping to Tap the Potential of Geothermal Energy

Monday, 06 February 2017
1
Dan McCue
TerraCOH, a start-up firm based in Minneapolis, Minnesota, believes they have developed a system to harness carbon dioxide to power a geothermal energy system. Their patented technology could be put to the test as early as this year, according to Jimmy Randolph, TerraCOH’s chief technical officer. They are hoping to build their first plant in North Dakota. 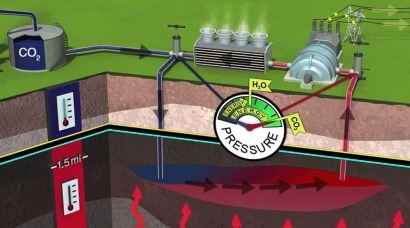 To date, the company has received over $5 million in grants from the National Science Foundation and the U.S. Department of Energy. In 2016 they began soliciting private investors.

TerraCOH’s technology uses “supercritical” CO2 to efficiently unlock thermal energy. Supercritical is a chemical state somewhere between a gas and a liquid. In their system, supercritical CO2 heats up as it’s pumped lower into the earth and is stored in porous sedimentary rock. The hot CO2 can then be drawn back up to the earth’s surface — without costly pumping — where it spins a turbine to create electricity.

Their long-term goal is to place TerraCOH Plume Geothermal systems near coal-fired or gas-fired power plants, directly capturing CO2 emissions, pumping them into the ground for eventual use in bigger CO2 fired-power plants. These plants would initially generate up to 15 megawatts, but could eventually be up to 300 megawatts. Another goal is to use the geothermal system as a “battery” for solar and wind power.

Tags: CO2 ,Geothermal ,Electricity ,Renewable energy ,Solar ,Wind ,Carbón
Add a comment
Luis
Sounds pretty nice, but what are the enviromental consecuences of introcing this gas into the earth? Quickly I think that pressure would raise up and maybe get the floor breaken, but it\'s just a guess. Thanks
¡Suscríbete!
wind