Wednesday, 03 February 2021
0
Robin Whitlock
The Utah Frontier Observatory for Research in Geothermal Energy (FORGE), funded by the US Department of Energy, has announced the successful completion of its first highly deviated deep well. 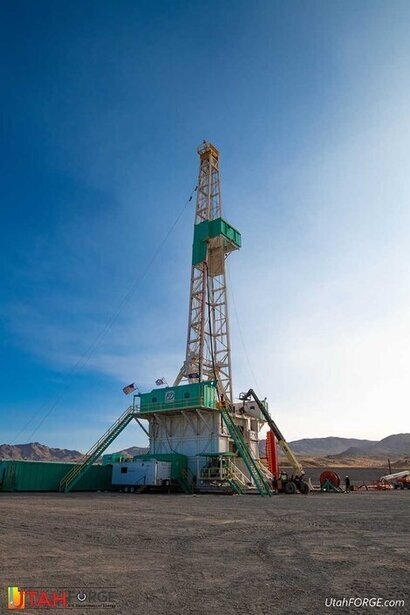 The geothermal well was completed 60 days ahead of schedule. The upper part of the well was drilled vertically through approximately 4,700 feet of sediments before penetrating into high strength, crystalline granite. The well was deviated at a 65° angle from vertical after reaching a depth of 6000 ft. This angle was maintained for the remainder of the well’s trajectory. The well ultimately reached a true vertical depth of 8,559 feet, and a total measured depth of 10,987 feet. Preliminary measurements indicate temperatures at the “toe” of the well will exceed 442°F (228°C). Approximately 74 ft of core of the granitic and metamorphic rocks that will form the FORGE reservoir was also recovered.

“We are incredibly pleased with the success of the well” said Joseph Moore, Ph.D. and Principal Investigator of Utah FORGE. “It was drilled under complicated conditions and will serve as a prototype for similar wells around the world.”

With this well successfully completed, a series of tests can be run to facilitate the development of the EGS resource. Some of the tests will include determining the stress conditions through short-term injection experiments, during which microseismicity will be carefully monitored. Other tests will allow for the interpretation of the orientation and distribution of the existing and induced fractures in the granite, which will form the pathways for water to circulate and heat up in the newly created EGS reservoir. In the future, a sister well will be drilled to form the basis of an EGS.