Friday, 22 July 2011
0
Dan McCue
The president of the Hawaii Electric Light Co. (HELCO) on the “Big Island” of the US’s 50 state has told customers the utility is considering adding more geothermal power production to its portfolio. 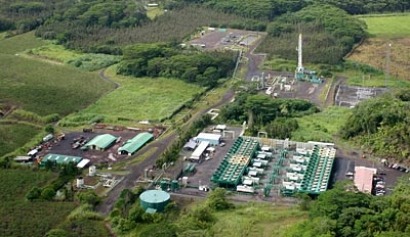 In a meeting with dozens of residents in Hawaii’s Hualalai area, Jay Ignacio said the company is investigating expanding geothermal energy to the west side of the island.

Hawaii County already gets 31 percent of its electricity from renewable sources, the highest rate among the state's counties. Adding geothermal capacity would help HELCO decrease dependence on fossil fuels while raising the amount of energy that comes from renewables.

Ignacio told the publication West Hawaii Today that geothermal on Hualalai is one of several options the utility is considering.

“Hualalai actually does have an area of potential geothermal resources, so it might be a possibility we could have geothermal here on the west side,” he said.

Ignacio said the company and interested parties have discussed geothermal projects, which would require investors willing to take on a financially risky undertaking and be able to reach an agreement with the community. However, no decision has been taken.

“There is a lot of potential, but no real project yet,” he said.

With an abundance of renewable energy, state energy planners and Hawaiian Gov. Neil Abercrombie have said they hope a future undersea power cable could eventually reach from Oahu to the Big Island. Current plans for the cable call for it to connect power-hungry Oahu with proposed wind farms on Molokai and Lanai.

Of the power produced on the Big Island from renewable sources, 17 percent comes from geothermal, 12 percent from wind and 2 percent from hydrothermal.

Hawaii’s geothermal energy comes from volcanic heat stored beneath the earth's surface. Underground reservoirs of water heated by volcanic activity can be tapped for steam to generate electricity.